Church of Disgust – Weakest Is The Flesh 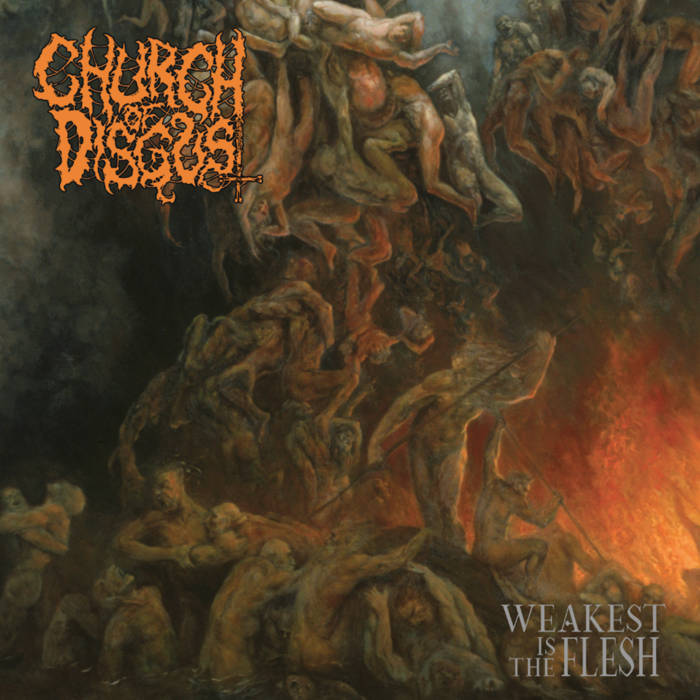 Active for the past twelve years, Texas based quartet Church of Disgust are finally releasing their third full length “Weakest Is The Flesh” under Hells Headbangers Records. Six years after the previous “Veneration of Filth” surfaced, they continually intend to display crystalline forms of OSDM, giving homage to horror literature influenced by works of H.P. Lovecraft in lyrical themes, such as “Boiling Seas of Yuggoth”.

Aside from switching to US based label from previous Memento Mori as well as improvement in variance of vocal cadence, the progression from previous “Veneration of Filth” solely notable difference from primitive, raw form of death metal, to resonate production styles akin to classics like Autopsy’s “Mental Funeral”, Obituary’s “Cause of Death” or Immolation’s “Dawn of Possession”. Their objective is to instill the blueprints of early 90s death metal form without any frills, exception of audio taken from 2019 horror/sci fi flick “Color Out of Space” (& also inspired by Lovecraft) featured on intro of their extensive title track.

Similar time lapse to previous LP, forty minutes of decadent riffs, abundant use of kick drums, all around full of vivacity & purest form of definitive Death Metal. Foundation is built around guitar work with drums to coincide, familiar tonality of Morbid Angel in particular on “Seemingly Unnatural Infestations” & “That Which Dwells In The Gloom”, infectious riffs by Bokemeyer that make a captivating appearance ⅘ of the album, excluding the brief ominous instrumentals “The Great Tomb That Holds No Souls” & “Throne Bearer’s Dirge”.

Though nothing innovative, this album has straightforward compositions, delivers intense unrestrained melodies. Vocal cadence is parallel to Glen Benton with a gruff hoarseness insinuating a menacing behemoth.