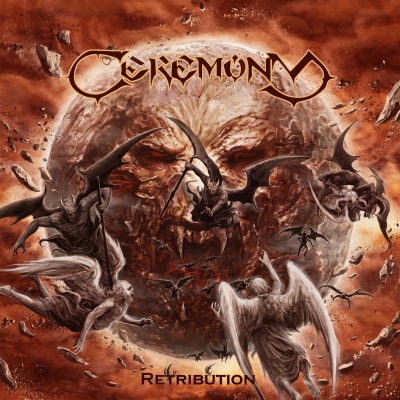 Active since 1989, released one sole studio album titled “Tyranny from Above”, fell apart as a band after some time, but now 26 years (!!) later a new album seen the light in March 2019 which got the name “Retribution”.

I don’t really know who the retribution is for, but we may be glad they are back in optima form. In the beginning they played Death Metal with lots of technical competency, but now it seems they also added some Black Metal layers on the cake, and a minimum of Thrash metal. Riff wise they still overrule lots of other bands active these days, and vocally seen they haven’t forego in emotion and strength. There are lots of tempo changes audible that make the album diversified and attractive the entire album. Track “Divinatory Rites’ clocks more than 8 minutes and is filled with frequent drum parts that motivate my neck muscles.

Is this one comparable with their older stuff? Well, in some way it is, but old fans from this band must be aware they’ll have to adapt in the beginning. To conclude: this is a good Death/Black metal release. (Fredde)