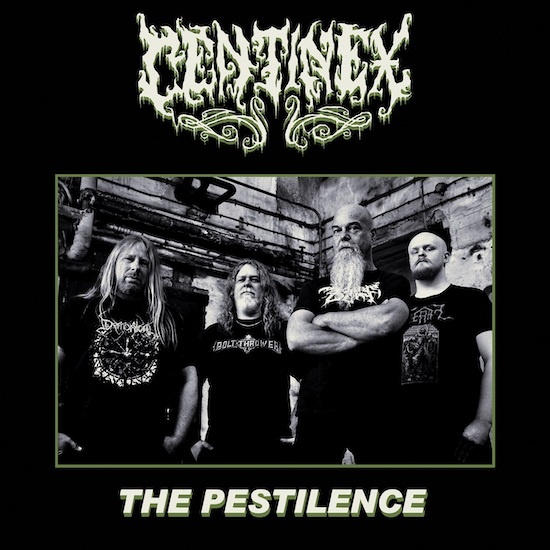 You can accuse the Swedes of Centinex of anything, except a lack of underground aesthetics. Despite taking a few years off (from 2006 to 2014), they have been tenacious in their vision of Death Metal. With that, they never broke through or got beyond relative cult status. And judging by the quality of their quite extensive discography, that is also a justified position. Not one of the old albums can rightly be called a real stunner; on the other hand, a complete dismissal is also out of place. A bit of a middle of the road band, shall we say.

This EP, ‘The Pestilence’, follows 2020’s ‘Death In Pieces’, the album on which we first heard vocalist Henrik Andersson. Compared to his predecessor Alexander Högbom, Henrik was quite a step back and also made the album a lesser experience as far as I was concerned. In terms of sound, ‘Death In Pieces’ was still a real Death Metal album with enough pace and a slight Swedish accent, typical Centinex we can say. On ‘The Pestilence’, the band seems to take another step back. Not only in terms of vocals, Henrik sounds even more forced and uncomfortable here, but also the music seems to have sacrificed on lethality. The Death Metal sound has been traded in for a more thrashy approach. This, in itself, is not a problem, Centinex always had a bit of that thrashy feel, but it doesn’t work out very well this time. The main focus of this unsuccessful thrashy approach is the more-than-moderate vocals and lacklustre riffs. The somewhat angular Thrash that might have some comparisons to a band like Exumer or ‘Agent Orange’-era Sodom, comes off forced guitars and rather standard chopping drumming. it really just sounds as uninspired as its cover art looks. As much as I’d like to, they never pass the level of mediocrity. Centinex never was a high flyer, but this musical direction in combination with substandard vocals can only usher in a new decade of underground existence – a breakthrough is really out of the question.

I recently wrote in a review that EP’s are often used to introduce a new musical direction for an upcoming album on the one hand, or it contains material that doesn’t fit well within the current musical direction and is therefore released on an EP. Whichever of these two options Centinex has in mind, ‘The Pestilence’ is not a very successful experiment. My advice would mainly be to slowly look out for a new singer. (FelixS)