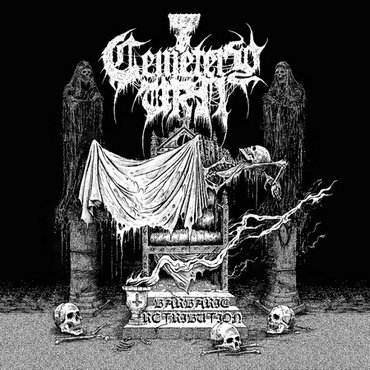 The barbaric horde of Cemetery Urn returns already with a new effort called “Barbaric Retribution” only 1 year after their 3rd  album “Cemetery Urn”. The Australian sickos are blasting all around the way we know it, with a good dose of crawling, doomy Death Metal in between. This time I think the songs flow a bit better compared to the self-titled album. The songs are straight in your face. No gimmicks, no bullshit, just pure death metal. In total the album has some memorable moments, something the predecessor lacked a bit. The album is heavier, thanks to the more doomy, atmospheric dark haunting songs and passages (“Death Mask Preserver” for example). Those make this album high class Death Metal the brutal way. Tremolo picking reign supreme here, with slower and faster parts as well. The single picked chords are a great change into their sound and give it more depth. The drums vary from bombblasts to back beat pounding rhythms to solid groovy drumbeats. Chris Volcano kills with his throat once again and the bass is fantastic and wouldn`t sound so powerful without. Killer Carcass-like guitar solo thrown in for an eye-opening moment. Alternating between speed and crawling chaos is triumph, which turns into a killer album with more variation than ever proposed by the band. Well done guys. (DPF)