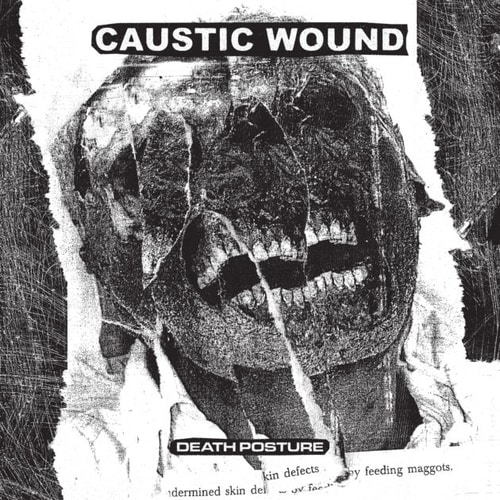 “Death Posture” easily is one of the most talked about albums of 2020, far exceeding expectations of many in creating one hell of an LP among this super group of kickass musicians. Caustic Wound previously released a demo “Grinding Terror” in 2018, and this LP gives you a well rounded mix of Grind and Death Metal with no bullshit gimmicks necessary. Artwork is simple but bold enough to grab your attention.

Featuring three members of Mortiferum, and singer of Cerebral Rot, you would expect another slowed down, doom sound but NOPE. These guys flipped the script, fusing Grind & old meets new Death Metal elements with turbo speed riffs between Bowman and Slaker; add in Casey Moore’s machine gun drumming and Lindstrom’s vocals to give us a taste of freshly pressed metal. We knew these guys could fucking play but to be able to create something out of what we were expecting to hear just blows my mind. 14 tracks clocking in a bit over 26 minutes, there’s no dull moment and no skips required. Each track generates a sonic death grinding bliss, with really their opening “Death Posture” closing track appropriately titled “Cataclysmic Gigaton” is the longest (3:09/3:31) of the album, giving just enough time to truly savor the short but sweet songs thru the album itself. Some of my favorites include “Black Bag Asphyxiation”, “Terror Bomber” and “Uranium Decay.”

Impressed with the sound and everything included with this album. There’s not much to say that hasn’t already been said. Just go listen to it already if you haven’t, kapeesh? (Tori Belle)