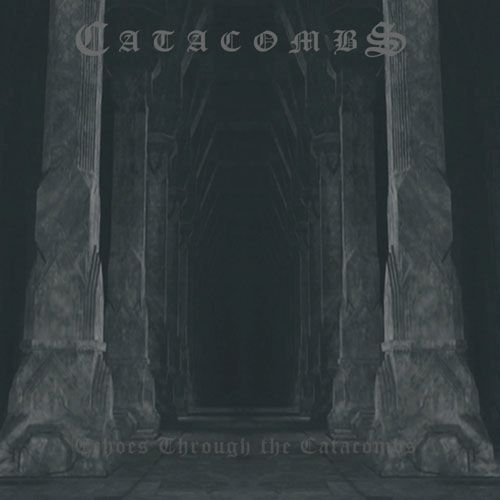 Catacombs is the Funeral Doom vehicle of morbid American Xathagorra Mlandroth, also known (somewhere, I’m sure…) for his work with Hierophant. Last year, I purchased the sumptuous double vinyl picture disc version of his debut album “In the Depths of R’lyeh” and this was an inspired decision as it sounds incredible on the deck, especially in the dark of night. When I heard that Russian label Solitude Productions was re-issuing the 2003 mini-album, I made quick contact to seek a copy … and here it is:

The original Cthulhu Productions/Antinomian CDr pressing of “Echoes Through The Catacombs” was painfully limited, so not too many grumps got their hands on this devil until now. Essentially, the release comprises two songs which clock in at just short of 30 minutes. However, the actual running time has been doubled to almost an hour by the inclusion of remastered versions of the same two tunes. A bit dumb that, I have to say. Then again, the tracks are free so where’s the harm?

Minor bonus track quibbles aside, what we have here is an exemplary exercise in underwater snail’s pace doom that just drags out almost forever and reaches into the deepest depths of the psyche. Infinity can be an entertaining place, even when there’s suffering taking place. Challenging Disembowelment and Esoteric for sheer sonic heaviosity and rubbing shoulders with the muse of Evoken and Nortt, this is music for watching dinosaurs to. (GeraldR)