Casket Slime – They Sleep We Creep 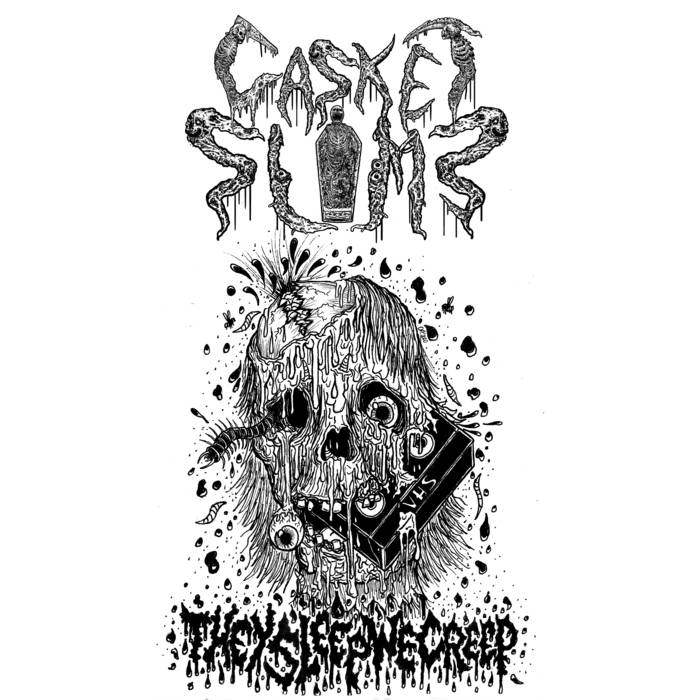 Never enough attention to our Canadian neighbors or think twice that bands like duo Casket Slime conjures up filthy, over the top melodies with smutty, detestable lyrical content parallel to Mortician’s makeup with different vocal cadence.

“They Sleep We Creep” stamps their first LP, then another LP they released months after called “Take a Bite!” Two full lengths pushed out within a year shows the driven motivation to put themselves out there and convey heavily distorted riffs, drum programming, and occasional horror samples to give contemporary vision that is Casket Slime.

With pseudonyms Freddy and Jason, “They Sleep We Creep” features 24 tracks, all within less than 3 minute range, and rounds out to 38 minutes of playtime, you get variety on this particular LP. You got a few shorter side less than minutes tunes like the space trippy “Otto Goes to Space”, “Kill The Klan”, and “Death Comes Lifting”. Then you have the trio of tracks with horror samples including “Horror Rising”, “Quackin N Slashin”, and closer “I Warned You Not to go Out Tonight”, none of which I could decipher the original movie origin, clever.

Only track that I wish was tweaked a bit better in production is “Hombre Loco”, it’s a bit too “thick” in production, but every other track on this album is gold! Some of my personal favorites include “Night Stalker”, something about the drum programming that comes off as 8 bit Death Metal, can totally get behind that and also anything pertaining to notorious serial killers is a plus. Another track “Victor Crowley” based on character from Hatchet movie series, slashy gore pairs perfectly with the raw heaviness from Casket Slime, brief but packed with a pummeling force.

Another favorite and obvious parody of Mortician’s “Hacked up For Barbeque” is track “Hacked up For Compost”, lyrics “life arises from your demise. An eternal cycle of death”. Check out if you’re a fan of Fluids, Mortician and Impetigo. (Tori Belle)