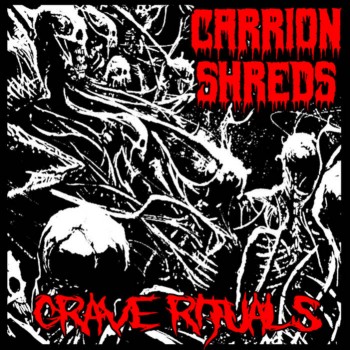 Well, small underground Death Metal cassette labels are popping out all over the place and the same goes for the orchestras that are playing the hymns of the depraved, and one those newcomers that is having your attention now, is Carrion Shreds from Italy.

We can be quite clear about the music itself…plain Death Metal! Nothing fancy, just 1990s Death Metal with a touch of the old Swedish and Finnish scene but without the typical buzzsaw sound accompanied with a deep grunt. And while we are talking about those scenes, “Grave Rituals” has a more Hetsheads meets Gorement approach than the common Dismember and Entombed influences. Again…without the buzzsaw sound…before I get any angry pedalphiles at my doorstep.

Carrion Shreds has some nice ideas and “Grave Rituals” do have some good moments but I do hope the drums can get a bit more “active” sort of speak, as I think the beat during “To Pieces” could have some more spunk for example. Let see what the future beholds for Carrion Shreds… (Ricardo)