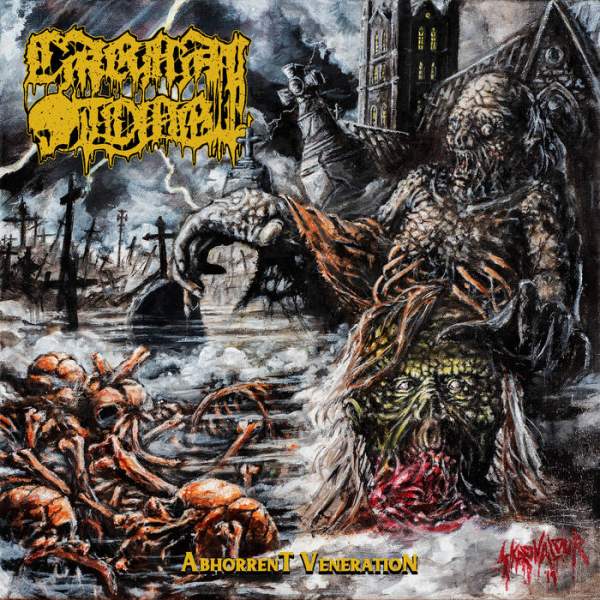 This one is a doozy. I’d never heard of Germany’s Carnal Tomb before, so I had a chat with the main man Ricardo, and he suggested I check out their back catalogue, and when he speaks, you listen, So I did, and then came back full circle and decided to review this just as it is. I may be a fool, but I’ve never actually known them that well, so to be honest I have to do it this way.

And, Fuck me in the goat arse if this is not one hell of an album. Yes, it’s full of is’ms. Entombedis’ms, Asphyxism’s, hell, even Obituary is’ms. Some of the solo’s can make you feel like James Murphy himself is in the room. I’m even gonna chuck in a bit of early Paradise Lost, for two reasons. A) because I can, and B) because fuck you. No, but seriously the tone of the guitar at times and the notes played are some serious shit. If you think these guys came to a shitfight with a gun, you are wrong, they brought a fucking cannon.

HM-2 of course, and that get’s real boring as I have previously stated in other reviews if not in the right hands. These guys take that sound, and all of the is’ms, and throw in a mix of, well, to me, Death Metal, a touch of Doom (Cryptic Nebula,I’m looking right at you), or maybe some sort of dog that has the blues, and you will get a bloody good ride out of this.

You may stick your is’ms up your arse as far as I am concerned. This is Death Metal, and for a first timer, probably some of the finest you will hear. It’s not just and endless repeating riff with some twatwaffle barking at you like your neighbours dog at 3am on a wednesday. The tempo changes, the mood changes, the whole thing just reeks of excellence.

Thank you Ricardo for showing me the darkness that is Carnal Tomb. (The Great Mackintosh)