Burial [ITA] – Presence from the Beyond [Demo] 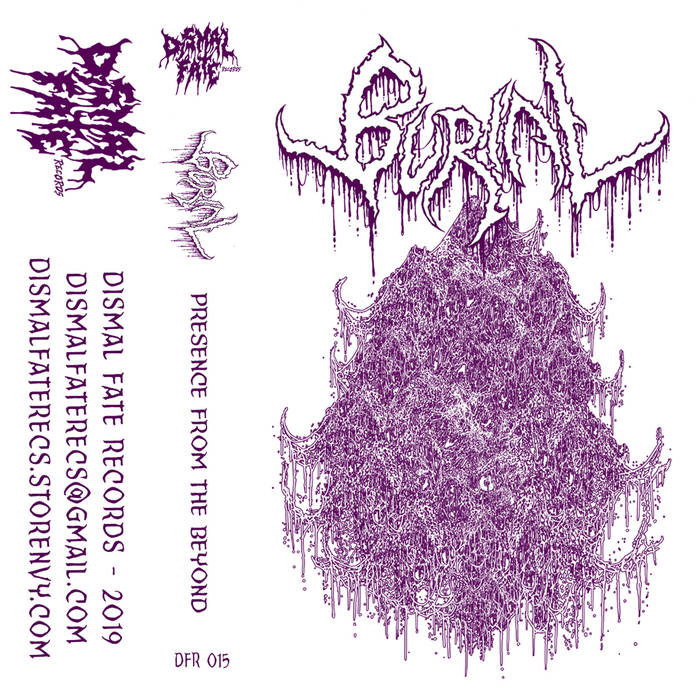 Dismal Fate Records pleases me with a second release by my new amici Italiani “Burial”. The tape is cursed with some magnificent artwork designed by “Manuscript Of Death”, it’s a real stunner. Now the first release wasn’t exactly a genital torture to review. I like this second release even better. These two songs aren’t as easy to digest as the three songs they presented me on their first demo “The Forgotten”. This time I have to put some more effort into my listening. The first thing I noticed was the drum sound, very dry and hard sounding yet more detailed now, especially when Hannes D. goes full throttle on his kit. They handled the production of this demo tape like it should at void studio. Transparent and clear with that gloomy underground feel to it.

Opener “Presence from the beyond”, a ten minute beast, opens with a harsh noise-like intro. Lots of dynamics and atmosphere, lots of interesting stuff going on in this epic track. From very slow, depressive and heavy riffing to super-fast vicious lashes. Regularly the song slows down almost to a complete stop, only to kick you hard in the balls with a furious blast afterwards. During this fascinating ten minutes I didn’t get bored for a second, Burial grabs your attention and demands concentration during the whole length of this song.

Seconda canzone “In The Dark”, fires away immediately, with a tight and intense blast only to slow down after one minute to break up into slow, muddy riffing. “In The Dark” fades out slowly in bitter melancholy leaving me yearning for more. The same build up, the same song structure like the song mentioned above yet evenly intense and interesting.

Burial has earned my full attention and it deserves your attention too. (Franki_boj)