Burial Choir – The Eucharist of Martyrs 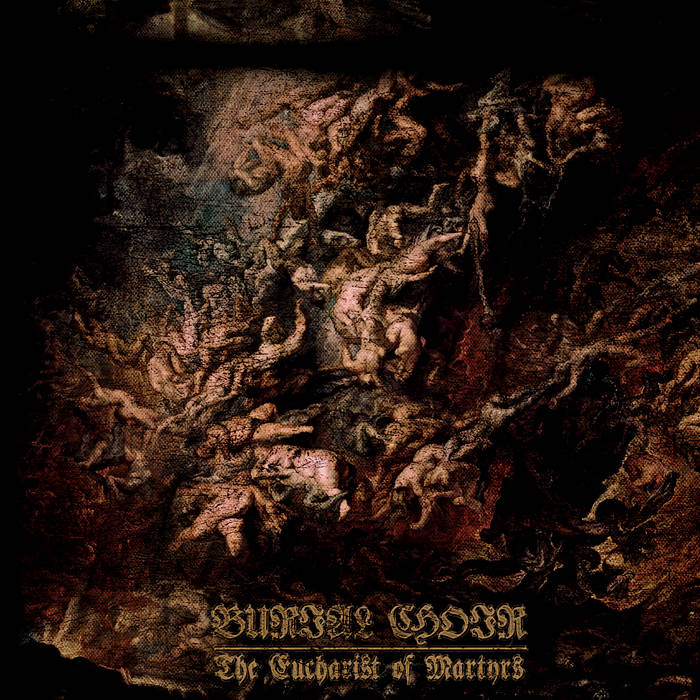 If the jaws of a coffin could exhale a breath of air I believe that the fog it emits would be transmogrified into the sounds heard upon Burial Choir’s album, ‘The Eucharist of Martyrs’. Clocking in around forty minutes comprising of four hymns the album in simplest terms can be delineated as a cathartic journey, the moment of tranquility that is discovered in those minutes where the pen transcribes the final note of life, the final words that would be etched upon the memories of those who bother to have you reside within themselves as you make the decision to depart this mortal coil.

‘Anathema’ is a track which exemplifies this as each crawling note that is expelled feels like the shovel that digs the soil with each slow movement, creating your new shallow dwelling, so too does each musical element reverberate. The positive here is that in Funeral Doom where the note lingers for that atmospheric resonance (while this is by no means a negative), here instead of having that prolonged effect, the slow creeping timing is made use by filling its cavernous depths with short yet tenebrous dissonance that crafts the aura of one who takes the last faint shallow gasps of air as the silver threads has been severed by the seers of fate.

While ‘Anathema’ sets the atrabilious tone it is the title track, ‘The Eucharist of Martyrs’ that would be sounds of the funeral precession as the pallbearers take your coffin to be lowered into the plot of dirt. For this track here demonstrates more the musical prowess where the amalgamation of the instrumental components carve out a dismal yet beautiful atmosphere that can only be discovered within the void, this aspect also engulfs the whole album, as there exist variations of the same atmosphere that coils around each track like the mist that inhibits the lone forest.

The vocals that bellow forth carries with it a depraved yet haunting air with it, like the noose that is tied around one’s neck breaking the flesh and restricting air, in the midst of one’s departure, I would imagine if a voice could be formed, it would be the one upon this album. It is truly unique that within the register that relays a fractured soul, that inside those splinters, solace can be discovered within the sounds.

However, one of the most important features that amplify the moments upon the album is the production utilized as it can be compared to that of an exposed nerve, where the slightest stimuli felt is magnified, and this works as a benefit towards, ‘The Eucharist of Martyrs’ as the miniscule moments that bleeds emotions are illuminated vastly which makes the listening experience much more potent.

Overall, this is a fantastic album, one that grants the listener a melancholic journey even if the path is paved with despair, there is still semblance of beauty within this release. (Justin Joseph)