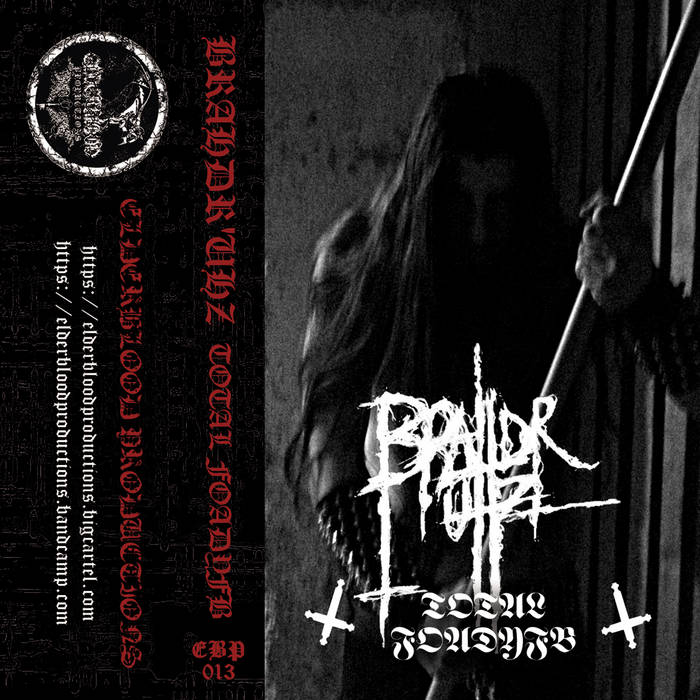 Brahdr’uhz is a sinister one man band from Switzerland and the brainchild of Brahz who handles all instruments. I first came across its brand of raw, filthy and tormented Black Metal mayhem with the 2018 “Land Of Darkness”. And frankly, I wasn’t disappointed with the result.

This band/project has manifested itself in the underground scene only a few years ago and since then Brahdr’uhz managed to release an enormous amount of material on different formats and labels.

“Total FOADYFB”, is a compilation of  all three parts of the F.O.A.D.Y.F.B trilogy, previously only available on a disclosed number of tapes and hereby officially re-released in its entirety by the noble Elderwood Productions, which is run by Fog from Inferno Requiem.

Musically, Brahdr’uhz puke out a violent strain of insane blast beat whipped, raw, yet well-constructed and pro recorded raw, icy and ugly Black Metal – topped with horrible tormented vocals, yet not neglecting a sense of primordial melody. Brahdr’uhz  aren’t shy to release the gas pedal either, which cumulates in an even more menacing type of misanthropic Black Metal. Even raping Celtic Frost/Hellhammer riffs in a more mid-tempo track gave me the chills. There’s infernal atmosphere and unsettling ambience aplenty to be found in the tracks of “Total FOADYFB”. The hollow drums, the whirlwind of sweeping tremolo picking and the hysterical vocals that barely manage to escape all this musical violence. It’s all there.

Similarities to other bands? The faster material from bands on the Altare/Signal Rex rosters comes close. You know what I mean : this is satanic Black Metal music they way it was supposed to sound, according to die hard purists.

Those who their dose of Black Metal unpolished and untainted by commercial tendencies, but well-produced, raw yet not too one-dimensional are hereby invited to check out the band on the usual channels. (LCF)