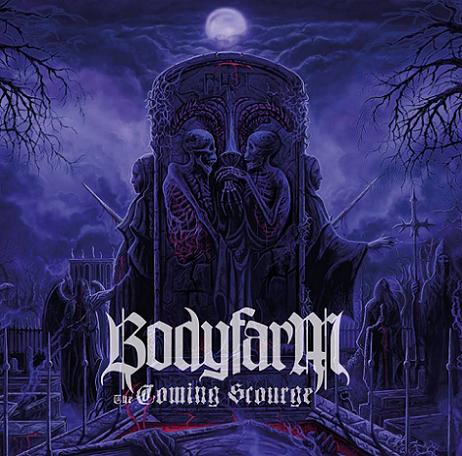 Once we released our first issue with a review of Bodyfarm’s debut album “Malevolence”, the second album called “The Coming Scourge” was already on the shelves. One of the disadvantages of having a fanzine instead of a webzine. Still, I don’t think there will be a third one when you read this…otherwise we are doing something horribly wrong. The Old School Death Metal played by my fellow Dutchmen is as simple as catchy. And simple is not meant to be negative as it is straightforward and grabs you instantly at your throat. It doesn’t need several spins to land. The guys of Bodyfarm show some different faces on their second album, as there is an acoustic intermezzo, a track (“The Well of Decay”)with Blackened Death Metal riffs as well as some Gothenburg ideas (first Soilwork) but also typical Asphyx openings (“The Frozen Halls” and “Der Landkreuzer”). At the end the listener will hear a little treat, as Bodyfarm covered Bathory’s “Enter the Eternal Fire”, one of my personal Bathory favorites. The quality of the original version will never be equaled by anyone, but these guys made a fine tribute with their cover. Yes, The Dutch Death Metal scene is still known for quality as “The Coming Scourge” is a good successor. (Ricardo)