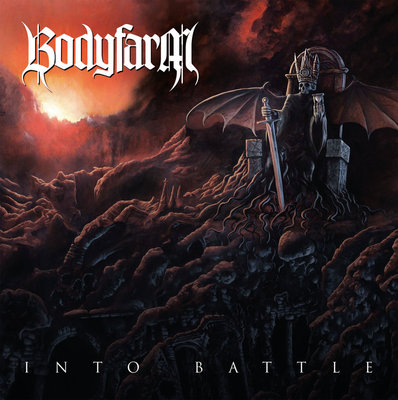 What we have hear is a remastered re-release of the 2010 debut EP from Bodyfarm. Along with a new and incredible cover, the remaster really makes this album jump out of the speakers with a ton of ferocity. If someone told me this was recorded yesterday I wouldn’t have a hard time believing them.

Bodyfarm specialize in a style of Death Metal that to my ears sounds like a more groovy Sinister. They definitely aren’t afraid of speed though, clearly evident from opening track. Rhythmic drum rolls, crunchy riffs and whammy bar dives set the stage before the blasting commences and if you are listening to this loud, it hits you like a ton of bricks when the vocals come in. Super catchy and tight and precise, the band writes razor sharp riffs that are further reinforced by some excellent double bass heavy drums. “Heartraped” is my favorite track. Starting with a drum fill that would make Dave Lombardo proud before going into some awesome thrash and grind influenced riffs.

Bodyfarm aren’t a name that is thrown around a lot in the underground and that is something that needs to change. This is high quality and if you haven’t checked out the band before why not start right at the beginning? (MikeH)