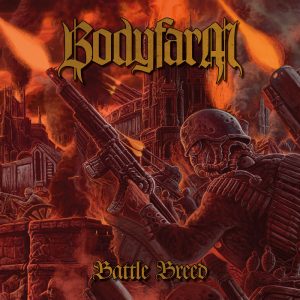 The third album. The bloody third album. One of my former crewmembers at Vampire Magazine, the well respected and personification of Statler and Waldorf of the Muppet Show; Ron Salden, once said to me it is the most important one in the career of a band. The “make or break” album. Are you progressing or are you a mere copycat of yourself. The first two albums, “Malevolence” and “The Coming Scourge” were solid well played Old School Death Metal albums, the first being straight on OSDM and the second one had more hooks. Both aren’t phenomenal, but certainly of a decent grade which gave Bodyfarm attention and got awareness of Old School Death Metal fans around the globe. With “Battle Breed” they will keep their fan base and gain some new souls as well, as it is a step further. Although the guest vocals of Martin van Drunen during the track “The Dark Age” will strengthen the thought, but there is without doubt a Hail of Bullets link in the music of Bodyfarm. Of course mostly due the grooving riffs and drums. When the Dutch battalion throw in some melody in the songs, one can’t deny the Swedish scene. A mix of what Dismember did on their last 3 albums (“Where Ironcrosses Grow”, “The God that Never was” and “Dismember”, and I’m not referring to the Iron Maiden leads), Evocation on their “Dead Calm Chaos” album, early Amon Amarth and some late God Dethroned. Subtle riff-driven melodic lines, without getting all In Flames “The Jester Race” for example. The production is crystal clear and for me it’s a minor setback. Not that I’m against clear productions, but in my humble opinion the sound should be more dirtier as the OSDM itself is presented as a Panzer tank on the battlefield. And a tank without dirt…can be found at a museum. But a part of the minor and meaningless critic from my side, it’s an OSDM album which is worth your money. (Ricardo)