Blyh – Transparent to the World 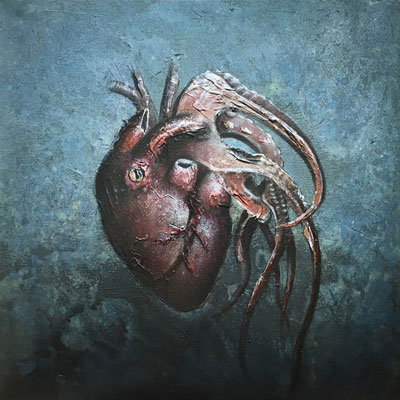 Released independently in 2017, The Crawling Chaos Records grabbed the opportunity to release Blyh`s debut album on vinyl this year. The German band consists of 2 members handling everything. And they succeed. The album is a very strong debut, using a wide range of elements to incorporate in their brand of Black Metal greatness. The songs are longer than average, and have a lot of twists and turns (for this kind of black metal) with tremolo picked riffs and leads intertwining and progress into other territories within the dark cosmos, with a skin pounding drum carpet which not only uses your typical blasts and grooves, but possesses enough craftsmanship to vary in fills and breaks to make the changes and riff masteries interesting of a high calibre. Same goes out to the bass performance and the vitriolic vocals. Blyh change often face, serving some cold plates in the middle of a song with some clean guitar work, or some melancholic melodies, carried by a wall of sound by guitar and bass riffs as well as progressive drum parts which are amongst the best I have listened to the last months. The changes from straightforward Black Metal assaults and progressive, atmospheric dreamscapes seem to be easy for the 2 musicians. I hear some Satyricon, Absu, as well as some The Great Old Ones, maybe some occasional Mosaic, but nothing sounds like it was copied. They have their own amalgam of extreme metal here. To round this up there is also a cover version of Systral. Strong debut, recommended to all extreme metal fans. (DPF)