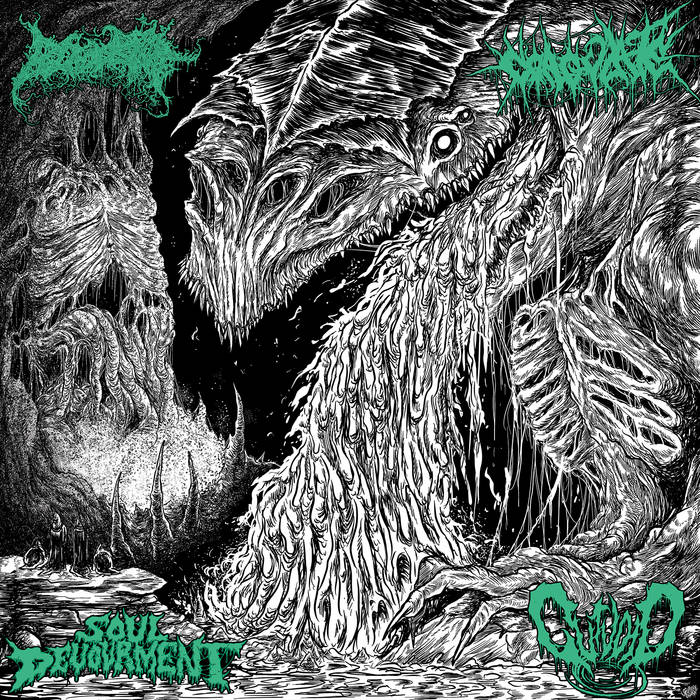 Let’s face it, this highly anticipated four way split exceeds your expectations and was worth the wait. Reminds me of the hype that 2020 split release which also featured Blood Spore along with Vivisect, Perpetuated, & Oxalate got major recognition and this 2021 split is outstanding, from the artwork to the contributing musicians, to the labels they collaborated with & put this monstrosity of heavy hitters together, making this one hell of a release! With 4 tracks, over 30 minutes of clobbering bliss, each group presenting their single impressionable tunes to leave their listener in a doozy by the end of last track.

Cover art by Gruesomegraphx, intimidating dragon/dinosaur hybrid brute spewing goopy fluids by a cavelike opening, dark space behind looking out into the void.

Opens with Philadelphia based Blood Spore, “Olfactory Cordycipitaceae Ingress”, intro has audio of flies & sexy bass line to set the leisurely, drawn out tempo of the Death Doom quartet; vocal style similar to Jeff Walker, snarly & murky in pitch, the shift occurs after building enough strain to unleash demented riffs and drumming by the end, not realizing 9 minutes passed like that *snaps fingers*. Then you have Minneapolis based Coagulate, “Up From The Vats”, directed towards a lengthy, unrefined, organic rough cut produced, mid tempo, traditional Death Metal format with vocals akin to Joe Ptacek (RIP) of Broken Hope. Third spot featured is Los Angeles four top, Soul Devourment with “Veneration of The Ascended”, fast paced grimy vocals that’s battering by the midway point. Celestial closer by Toronto based Gutvoid, “Murmurations of Twilight Bodies” tenebrous, astral-like with dreary guttural cadence.