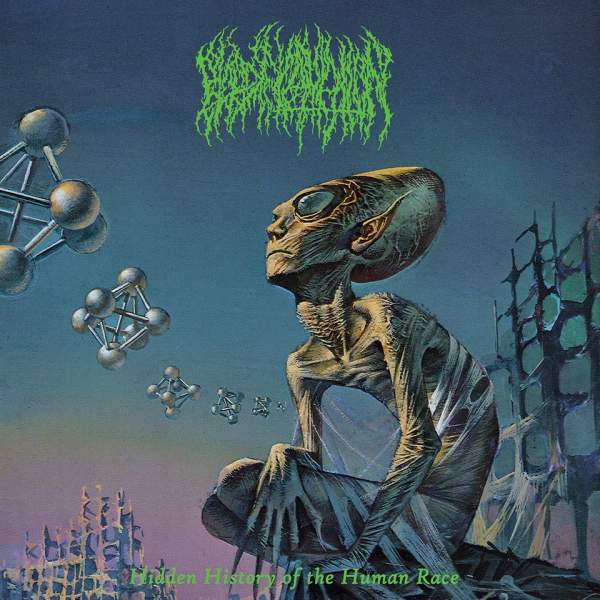 When the expectation for a follow up are high it’s often a newcomer that took the world by storm with the first steps or a veteran that just released a masterpiece after another during the carrier. We are now speaking about the first, a Death Metal band that doesn’t seem to know what boundaries are, at least compared to the most common ingredients used for Death Metal.

Blood Incantation were formed in 2011 in Denver, Colorado, and released 3 demos before their first EP “Interdimensional Extinction” which launched them on the map of death very quick. The following split with Spectral Voice just helped increasing the interest of Death Metal mongers worldwide and with their debut album “Starspawn” a 2016 favourite on many lists was spawned by these creative alien humanoids.

Timeghoul, Death, Morbid Angel and Demilich have often been mentioned as references and influences, and yes, I see all those elements too, although Blood Incantation have woven them in their own way to an amalgam that remains clearly known as Blood Incantation, thanks to super songwriting skills and musicianship that goes beyond elementary teachings and practicing. What makes them an excellent band too is the capability to change mood, faces when needed, being able to use technicality to build landscapes of cosmic proportions, with dreamy, dark, beautiful and horrific atmosphere without falling into wankery or boredom for the sheer sake of it.

“Hidden History Of The Human Race” not only has tons of interesting stuff to discover. The use of great effects, guitarscales, killer basslines with counterparts, spectacular leads, hyper versatile drumming that slays and bewares the groove at the same time, Death Metal vokills that do justice themselves. All this has been brought to life with a more than fitting production, their best to date and finally suitable for their sound, something that “Starspawn” lacked a bit for my taste. The more melodic and catchy the band acts, the more brutal they became on the other side, stretching the extreme even more.

I don’t know what will come next, but the bar is set very high, but I’m confident that the band will show us even more interesting music to bang our heads to. Killer release to all prog maniacs, open minded fellow metalheads and extreme music consumers! One of the year’s top albums once again. Congrats! (DPF)