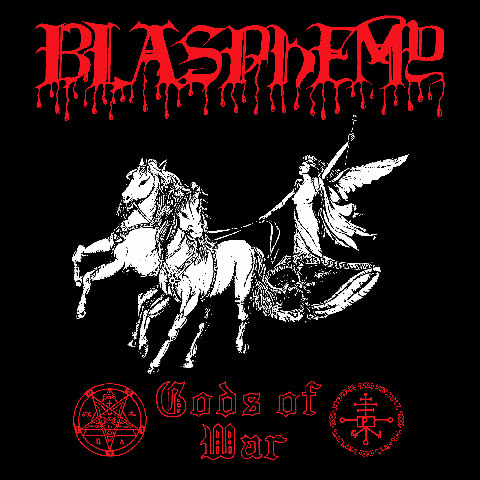 After a bad situation with their previous label (Wild Rags) where the band received no royalties for their debut “Fallen Angels of Doom”, Blasphemy’s sophomore effort “Gods of War” was subsequently handled by legendary French label Osmose, who at the time were releasing some of the finest Black/Death metal albums available. With “Gods of War”, Blasphemy pretty much carry on the same formula as the debut albeit with a bigger budget, slightly altered line-up featuring new and brilliantly named bass player Ace Gustapo Necrosleezer and Vaginal Commands, and much cleaner production.

After a short intro, Blasphemy set out to batter you once more with ten short fire bursts of unrivalled intensity, this time with more focus on the death/grind elements reminiscent of bands like Repulsion or early Sepultura. Once again, the playing is average at best with the band preferring to harness pure aggression rather than musical prowess, which is certainly no bad thing as the riffs pour out like violent lava flows over the unrelenting pounding blast beats and more varied yet still totally unfathomable vocals. Although not as instant or barbaric as the debut, standout tracks like “Blasphemous Attack” and “Emperor of the Black Abyss” highlight Blasphemy at their absolute best, and remain to this day some of the greatest songs the band ever created.

As I’m sure Blasphemy intended it to be, this album isn’t gonna be for everybody. In a metal landscape now seemingly forged by how technical you can play (yawn), this may prove to be far too primitive for newcomers to stomach. However, for those who want an insight at one of the forerunners of the bestial death metal/war metal scene look no further than this great re-release from one of the genre’s classic albums. (DaveW)