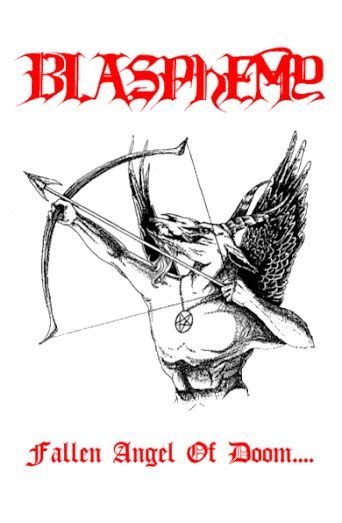 Love ‘em or hate ‘em, the influence and longevity of the now legendary “Satanic Skinheads” Blasphemy cannot be overstated. Having planted their bestial seed in the rotting bowls of a plethora of both innovators and (unashamed) copyists alike, Blasphemy have positioned themselves as forerunners of the black/death genre and remain to this day one of the most sonically violent acts to have ever graced this shit-smeared planet.

As the legend continues to grow, these awesomely packaged and sonically untouched re-releases by Nuclear War Now! are a welcomed addition to both avid collectors and newcomers alike, especially considering the original version of debut album “Fallen Angel of Doom…” (originally released by infamous rip-off label Wild Rags back in 1990) fetch small fortunes online, it is good to revisit this once hard-to-find gem with fresh ears nearly 30 years later and ask the question, was it really that good?

In a sense, of course it is! The almost unfathomable riffs and even more unfathomable vocals, amazing pseudonyms, crude execution and a production that pulls your gums over your teeth is all there and still as violent and destructive as it ever was. After the obligatory intro “Winds of the Black Godz”, Blasphemy quickly set about repeatedly kicking you in the bollocks with first track proper “Fallen Angels of Doom”, with guitars, drums and vocals spitting fire and brimstone at you from every conceivable angle. It is utterly relentless in its approach and sounds ridiculously heavy even though the guitars are hardly what you’d call prominent, with standout tracks like the Discharge-esque “Hording of Evil Vengeance”, Desecration” and fan favourite “Ritual” absolutely battering the senses.

As ever with this style of music, it is as much about the attitude as it is about the songs and with Blasphemy, you get absolutely shitloads of both. It is short, it is brutal and quite contrary to the music itself is beautifully packaged (particularly the die-hard vinyl versions I have heard which were released in 2017), sounding just as bestial and masterful as it did back when it was released. (DaveW)