Blasphemy – Blood upon the Soundspace [Demo] 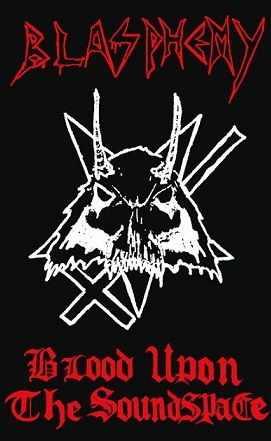 I mean, what is there to really say about these fucking legends that hasn’t already been said?! Everything they do rules and with such aggression everything seems so violent. It is what it seems. It’s violence, pissed off, fuck you tunes that is surely to make your old neighbour fall over dead but be smiling while they lay in their own piss.

“Blood Upon the Soundspace,” is a demo (duh) from a band that is known for their demos and this is no different. Sounding like they just put a recorder in their jam spot and hit record, got done with it and said, “THIS IS IT” and put it out on Nuclear War Now! Productions without any proof listening. And god damnit does it rule.

Songs like, “Darkness Prevails” and “Desecration” give us the traditional blasting Blasphemy sound. War fucking metal at it’s finest. Vocals really stand out hitting all the right notes with songs like, “Hording of Evil Vengeance” sounding like a goddamn evil demon using feedback to drive you insane… but in a good way. “Goddess of Perversity” is probably my favorite track blending the good war elements with a good blend of death.

All in all, Blasphemy fucking kill. Should be the music that is playing 24/7 while training militaries around the world. It’s ferocious, aggressive and everything you want in your music. (ThatAustronautGuy)