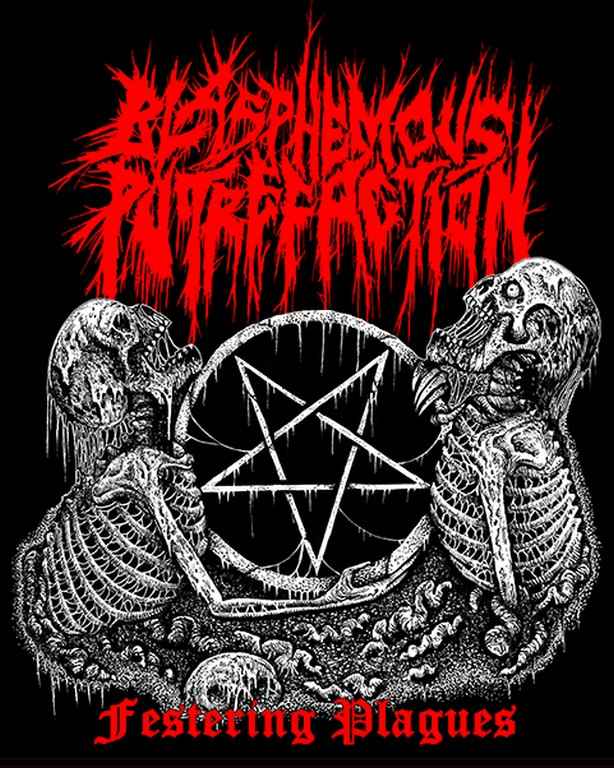 The first “Abominable Premonition” 6 track demo saw the light of day in 2017, spawning forth a mega heavy, murky and insidious old school style of grinding and bestial Death Metal, not unlike the endeavours of the early Swedish bands or an Incantation. I know, because I still enjoy their first effort.

“Festering Plagues” is their second release, released by the Mexican Death in Pieces Records on limited tape.

What is immediately noticeable are the additional sound effects: the chanting of  mantra’s on the first track, “Resurrection of the Dead”, the inhuman brutal and bashing cascading drum sound, the small disturbing sound fx, all courtesy of Tar Morion.

Add to that the panoramic shredding solo’s, the reverbing bleak growls that are all over the place (and beyond) and the notion for the dramatic, e.g. emphasizing the gloom, the doom, the desolation, darkness and brutality wherever needed and you got yourself a slab of truly blistering Death Metal raunchiness that kicks you in the yarbles like a donkey on steroids.

This is pure and evil Death Metal in it very essence. Think: early Asphyx, Pungent Stench, Paradise Lost, Grave and even Nihilist, drenched in an Incantation sauce and you’re almost there.

Production is state of the art.  A pity there are only 3 sledgehammers on this tape but do not worry: a full length is in the making as I am writing this.