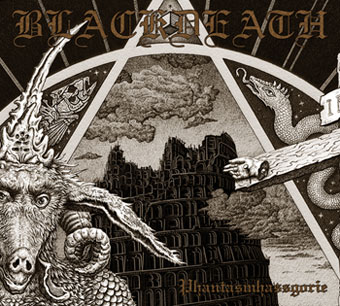 Blackdeath, Black metal from Russia. Enough said. No, just kidding, there is more to say about the Russians. Being familiar with their 2nd album “Fucking Fullmoon Foundation“ I can do comparisons between those 17 years that separates those two. “Phantasmhassgorie“ is their 9th album and their first in 4 years. The album was recorded by TT of Abigor who did an excellent job once more, creating a powerful, natural and well balanced record with all the dynamics needed to support the songs of Blackdeath.

The record itself is about hate, a concept album that fits perfectly into the context of Black Metal. The vocals in the German language help to create a reverberating hateful atmosphere. The throaty organ is a nineties relict, harsh and raspy and well performed with killer lines and accentuations. The basslines are phenomenal and more than audible, again props to TT. Not just being the „follower“ of the guitars but really used as a stand-alone instrument that works with the others even If playing counterparts. The guitars not only have a nice tone but also some killer riffing. Merging from open chord riffing to powerchord tremolo picking and rock moments, a lot of variation is brought into that defines Blackdeath. The band knows how to keep the songs flowing, something is also a keyelement served by the drums, who push the songs forward when needed, be it the faster uptempo beats, or the more variation o fit with cool drum-fills creating a kind tribal drumming without falling in this area too much. The drumwork is excellent, giving enough space to the others while still playing nice nuances on the entire kit with nice fills and cymbalpatterns. Effects when used are placed right and give an extra boost to the songs.

This is thankfully a Black Metal record that has the black in it`s core and the right spirit to be more than just nostalgia. By the way, did you notice that I didn`t compare it with “Fucking Fullmoon Foundation“? Not necessary, stands for itself. Black metal highlight. Pure hate. (DPF)