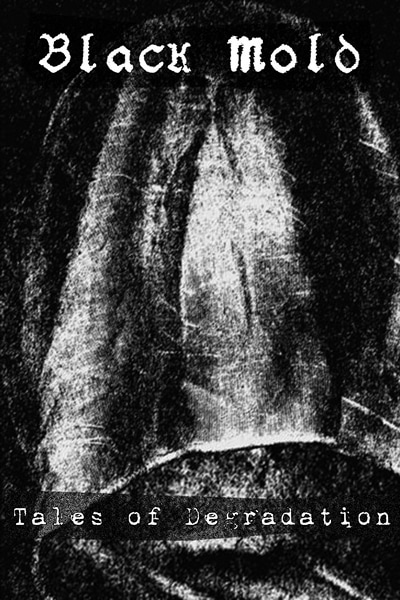 Punky black-thrashers (from parts unknown) Black Mold’s follow-up demo to last year’s “Atavism” is the perhaps  even more ferocious “Tales of Degradation”, and it’s slightly lengthier with 4 tracks weighing in at almost 14 minutes, in contrast to Atavism’s 5/11 ratio. Perhaps a full-length is not far off? The production here is a little more clear and concise; the harsh and punishing riffs remain as visceral as before, but there’s a little more room to breathe. While the dense black fuzz on the previous release was almost claustrophobic and the songs were straightforward, bludgeoning slabs of relentless aggression, “Tales…” seems to hint at some experimentation with the formula. The chugging brutality of “Bringer of Light”, the longest track, slows to a menacing crawl in its third act with the vocals belching out in a despairing groan. The highlight is probably “Encrusted Parasite”, with its frenetically pulsing punch of punk rock mayhem laced with electrifying death n’ roll grooves and the vocalist’s gritty, sneering barks evocative of later-era Entombed.

“Demon’s Embrace”, in turn has a stomping and roaring bombast undercut by a dark, melodic riff which fleshes  the track out welcomingly. Another hint of progression for Black Mold here is found in the song titles, with a focus on demonology and sci-fi in addition to the drugged-out nihilism at the core of “Atavism”. I’m definitely enjoying this auspicious shift in both sound and theme, and eagerly anticipating more to come from this dark and enigmatic unit on Portugal’s Hellprod Records. This release, due out in the tail end of May, is limited to only 80 cassettes, so act fast to get this for yourself. (Terrorgasm)