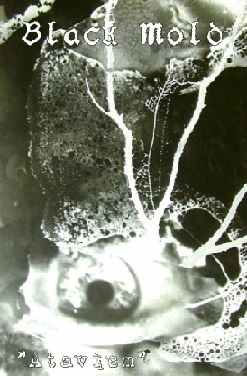 Black Mold is an upstart Black Thrash Metal band, but not much else is known about them yet. Only one demo from October 2018 is yet available for purchase, and that is limited to just 80 cassettes, through the well-established Portuguese label Hellprod Records. The entirety of this tape runs at just 11 minutes, but it is a hard-charging blast of punky fucking fury loaded with a droning wall of distorted riffs and pissed vocals that maintain a snarling, gurgling rasp which suits the harshness of the blackened assault quite appropriately. From the titles of the songs, as well as the demo, one can glean enough of an understanding about the theme of this music, and perhaps indeed of the band itself….

Nihilistic abandon and reckless embrace of a bleak existence filled with addictions, strife, and anger is splashed in deary tones across these five tracks, in a sort of contrast to the energetically catchy riffs and driving D-beat on display. “Let It Burn” kicks off hard and flies right into the bass-forward ballast of “Worship Nothing” with its shout-along chorus commanding absolute surrender to the void. There’s a stand-out track with “Shroud of Bottles”, a rousing burner whose swirling riffs and splashy blasts pull you into a vortex of drunken raging chaos, and segues into the final cut “Void Intoxication”, a dreary yet enticing burst of dizzying noise, reminiscent of Sweden’s Craft (“Terror Propaganda” is a must-own) and mid-’90s Darkthrone.

When I fist saw this release, I immediately thought of the Shitfucker song “Black Mold”, and the ugly metal-punk connection is definitely there, although there’s less of a rock ‘n’ roll vibe than that band is known for, with more focus on the punky blackened grooves that bands like Estonian militants Loits are known for. Fans of these groups mentioned (as well as any hardcore D-beat or black thrash maniacs) should definitely get a kick out of this, and would do well to keep a look out for more from this act.

Last words: Life’s a bitch and then you die, so fuck the world, Thrash ’til you Die!! (Terrorgasm)