Black Mass Pervertor – Life Beyond the Wall of Flesh [EP] 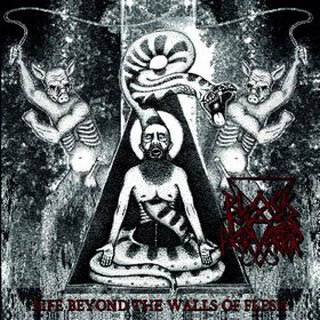 Black Mass Pervertor from Finland were unknown to me as the formation didn`t release much in their 20 years of existence (but who cares, quality matters right?). But all changed immediately after the first listen of their new EP called “Life Beyond The Wall Of Flesh“. As you can guess from the band name, they`re playing a more raw orthodox kind of Black Metal with some punkish influences. I hear some Ofermod riffing, Cerekloth open chord string wizardry, fat basslines and excellent versatile drumming with tasty snare fills (or fills in general). The vocals are on the Marduk side of the spectrum. You will hear some Horna and as the labels mention in their description, it reminds of some Barathrum as well (the slower sections are a good reference). The punk influences add a straight powerful note to it, having its apex when used alternating with doomy sections (probably one of the strongest points of the band). Very interesting release worth checking out. (DPF)