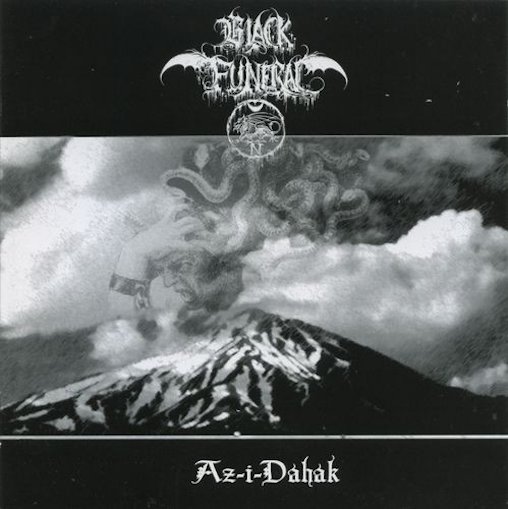 Every black metal purist should have at least heard about Black Funeral – at least, that’s my opinion. One of the pioneers of the Satanic metal invasion from the USA, together with bands such as Von and Acheron. Considerably cult, definitely an underrated band. After a few albums and problems the band fell apart and mainman Michael Ford (or whatever pseudonym you prefer) decided to go on with numerous other projects (with Psychonaut 75 and Hexentanz being the best known). But blood flows and is irresistible, so after a few years of rest Black Funeral got resurrected. This time Michael decided to go for it only by himself only helped out by the darkly erotic models Lux Ferre and Dana Dark, who both provide some female vocals to the album (and nope, this is not Sarah Jezebel Deva, so don’t expect any Cradle Of Filth alike gothic shite!).

Michael Ford has always been interested in the occult, in magic, witchery, vampirism and Satanism. Being originally an author of dark writing on the occult and the chaos magic theories he definitely has one leg in the darker corners of the world (and beyond) but the other is still standing on the earth (as we know, or actually see it) so we don’t get a view from someone who just seem to have lost his mind. These theories, stories and knowledge reflects definitely on the work presented in all of Michael Ford’s musical works. And that is definitely the case with Black Funeral’s new album, “Az-I-Dahak”. This album tells us a story of Persian Sorcery and Black Magic. Azi Dahak was a Persian king (or shah, as they were called) who made some kind of a pact with Satan (Ahriman, that is) and got kissed on his shoulders. From these kisses rose two extremely venomous brain eating snakes (see the cover). Azi Dahak is therefore one of Satans first sons… Eventually he got dethroned and incarcerated in a mountain (see the cover) in the country that we call Iran today. A macabre story…

Black Funeral always had a certain industrial touch to it, though it was never that emphasized as it is now. The album is definitely balancing between industrial ambient and black metal (in the traditional way). But this all is blended in something that is so very unique that I can easily state that this is the most original black metal album I heard in a very long time. Spiced up with some oriental passages and instruments. Michael himself describes this as ‘Apocalyptic Black Metal’, I’m not too sure whether I’m confident with such a term, but that the music breathes something uncomfortable, something dirty, filthy and revolting, that’s for sure. Apart from the aforementioned oriental elements I can’t really find myself in the music and the concepts at once. But you can’t understand what a relief it is to hear something that would go under the banner of “Satanism” and just doesn’t scream “worship him” (nope, I’m not referring to Samael here) but actually adds something useful and intelligent to it. Besides the industrial and ambient elements there is just the usual black metal ingredients, that means as much as repetitive riffs, harsh vocals and simple, yet effective drums. Not in the least, programmed drums, most of the times they are programmed very badly and the sound is mostly sucky because of that, in this case it only underlines that mechanical sound the album carries, I think a real human drummer wouldn’t do the job properly. Michael definitely succeeded in creating the atmosphere he wanted!

I actually would recommend this album to every black metal fan, but I need to say that this needs a pretty open mind and some time to get into, for this is not your easy listening Darkthrone alike black metal. This is far beyond the genre’s standards and therefore some people might give up, but the interested listener should be able to appreciate this. (FelixS)