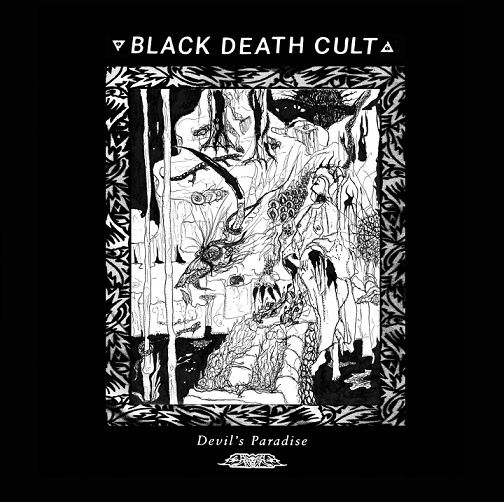 The current state of extreme metal has come to a point where most artists in this style are repetitively recycling the old stuff to make new chapters of their own. As a consequence, the situation has resulted in a lack of variations, originality, and uniqueness. Fortunately, bands like Black Death Cult are putting off exceptional materials once in a while to reduce the redundancy in this sea of mediocrity.

As named before, “Black Death Cult”, a quintet hailing from Canada; presented us with their debut offering “Devil’s Paradise” in 2019. It is an absolutely paramount quality of “Experimental” Black/Death/Doom Metal release with a very unorthodox approach. Without a doubt, this album is one of the finest among the recent underground releases as it has its own sound that captures a spellbinding atmosphere.

From the very beginning of Devil’s Paradise, Black Death Cult emits mesmerizing musical elements that are contained inside of a total of nine ritualistic hymns. The songs are fairly longer, for which the album clocks around fifty minutes in length. A variety of solid crepuscular riffs is shed all over that is paired with magnificent and ominous keyboard work. Each track herein has a more bewitching sensation than the other that is complimented by their trance-inducing ambience and morbid dark characteristic. The entire listen alternates between doom and bestial style, leaving the listener in a transfixing state with supernatural feelings. The right term to describe the vocals would be “necromantic”, which along with the guitars is done by Timothy Grieco from Antediluvian and Revenge. As the band speaks about transhumanism and artificial intelligence in an emphatically dark way, such a resonance suits really well. For a better understanding of their approach, musical references could be made to Master’s Hammer, Bethlehem, Sect Pig, Ride for Revenge, Necromantia, and alike; yet it would be difficult to find cues as it is unique in its own branch.

The overall tone on “Devil’s Paradise” is occult and surreal. Perhaps, its majesty might just seem too much to handle because there are so many subtle details to look for. It could be an uncomfortable or weird listen at first but keep in mind that this is a record of that category which gradually reveals its true magnificence after each consecutive spin. Admittedly, it represents a rarity as it offers something of a very high standard that is in a class by itself. (Osmani)