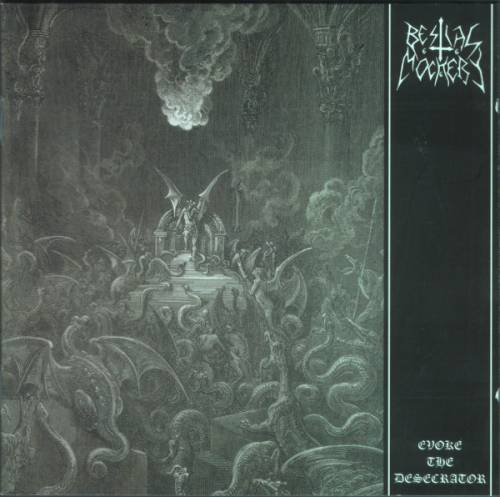 The year of ’95 contributed with the beginning of Bestial Mockery. A promo and a demo were recorded one year later and were respectively entitled “Battle” and “Christcrushing Hammerchainsaw” as a classic three-piece formation. Of course, line-ups were shifting when looking to this sick band of today. Thanks to some unfortunate developments, it wasn’t until the spring of ’98 when the second demo (“Chainsaw Demons Return”) was unleashed. In ’01 Bestial Mockery hit The Netherlands and Belgium for some unholy crusade with Maniac Butcher, Driller Killer, Lugubre, Botulistum and Viu Drakh. Currently the band has finished their long awaited LP/CD “Evoke The Desecrator” on the 1st of December last year after forging an iron pact with Osmose Productions.

Some furious black metal is brought to you after a short blasphemous intro on ‘Chainsaw Demons Return’. When the second track comes along it appears that Bestial Mockery creates some fierce and chaotical assault. Their music can be described as a rough mixture between the old school black/death metal riffs of Necrophobic  and Unleashed’ “Where No Life Dwells”, only more black orientated. Fast aggressive drumming and the nuclear screams from the guitars cause for that unique sound on “Evoke The Desecrator”. The vocals are also a great petrol to keep that engine going the whole time and do share a lot in common with T. Lindberg from the mighty and deceased At The Gates (RIP). Tracks as ‘Marching For Hell’, ‘Necromantic Ritual Desecration (Of A Sacrosanct Angel)’, ‘Goats Feast’ and ‘Soulburn’ really brings out the best of these Swedish bastards, due to fully exploiting their ravaging skills. ‘Necroslut’ is probably the catchiest track recorded on this CD and will bring some severe havoc when it will be recognized within the audiences. Title-track ‘Evoke The Desecrator’ finished the whole setlist and bears great variety in tempo; truly a worthy ending of this thirty minutes of pure desecration.

Bestial Mockery uses no melodies or whatsoever, but craft some serious foul black metal. If you happen to be within the Scandinavian borders next month and are curious to witness their live performance, a tour is planned on the 19th of February in Göteborg, Sweden. “Evoke The Desecrator” will be promoted as this release is worthy to represent the fumes and fires of hell itself. Prepare for war and claim victory! (ManuelB)