Behexen – By the Blessing of Satan 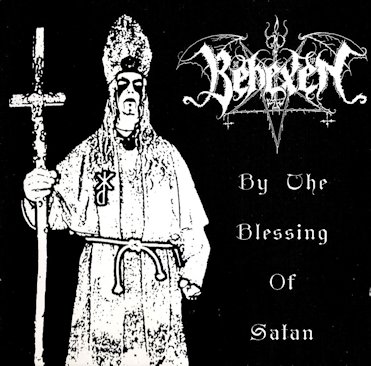 Yet again a great blackmetal album out of Finland. This time it’s Behexen with their newest output “By the blessing of Satan”. Extreme chaotic necro blackmetal is brought forth by these sons of Satan. Because of many problems with their previous label it took three long years to be able to sign a new deal, and this time the partners in crime are Finnish Woodcut Records. A label known by it’s high quality blackmetal releases. Recorded in may 2003 already it’s now about time to unleash this hellish primitive necro album onto this spoiled world. As said before Behexen plays blackmetal in it’s most rawest form. It is primitive, raw, necro, utterblack, chaotic….and extremely good! Musically they remind me a bit to Nattefrost or Carpathian Forest on one hand and sometimes to old Impaled Nazarene on the other hand.

There are 7 tracks within 47 minutes which gives each song quit a long duration. The album starts with the title track “By the blessing of satan” which is very intense with the same speed as a band like Dark Funeral or Impaled Nazarene for example. Great pitchblack guitar riffs and chaotic vocals like Mika from Impaled Nazarene on this one. The next track is “Fist of the satanist” which is one of the highlights on this album. I really like the rolling and pounding bass sound. Compare it to Carpathian Forest or Hatepulse and yet again Impaled Nazarene if you like. Like the first track also this one is extremely fast with some slower mid-paced headbang riffs used in between the fast parts. This is what I call blackmetal!!!

The next five tracks are all in the same vein as the first two so I won’t go deeper into each track seperately. But I DO want to tell all of you that “By the blessing of Satan” is one of those albums which should be in every collection of each self respecting blackmetal fan. With “By the blessing of Satan” Behexen has proven to belong to the top of blackmetal!!!
Furthermore my compliments for the great looking cover which suits this utterblack chaotic necro band just fine. Like the title of one of the songs already says; this album hits you like the Fist of the Satanist!!! (MarcelB)