Beast Of Revelation – The Ancient Ritual of Death 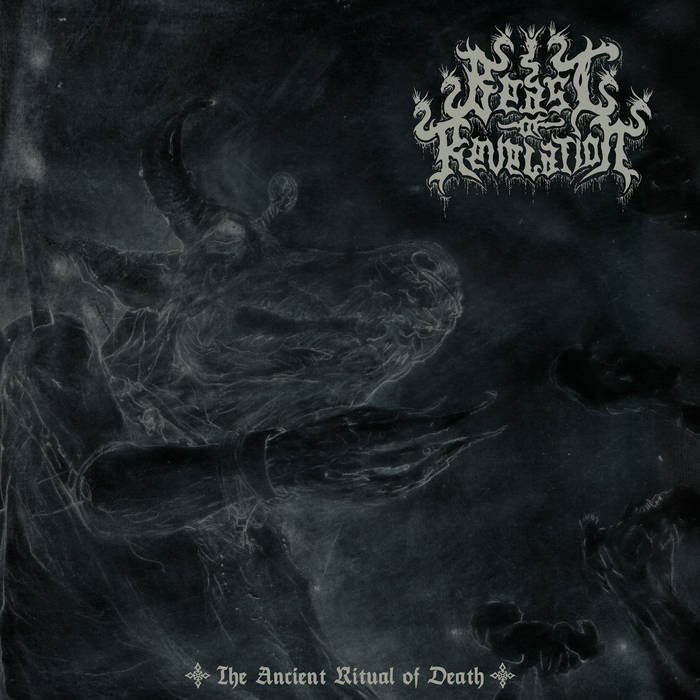 Bob Bagchus is a busy man. Despite his departure from Asphyx years ago, and later from Soulburn as well, he has remained almost omnipresent in the extreme metal scene. In the past years we have seen him appear on releases of Grand Supreme Blood Court, Minotaur Head, Infidel Reich, Hellehond and Siege of Power. The initiative for Beast of Revelation actually came from A.J. van Drenth, known for his saturnalia in (among others) Beyond Belief and Temple. A.J. and Bob had teamed up in the mid 90’s in the short lived Black/Doom project Throne, with both men having a passion for slow and heavy music.

So now here they are with Beast of Revelation. Old comrade John McEntee, Incantation’s main man was found as a vocalist and the three recorded this concrete chunk of sloooooow Doom/Death Metal. And slow it truly is, this is as doomy as it gets. Try playing “Lost Paradise” on half speed and you have an idea what Beast of Revelation sounds like. Winter is an obvious parallel, but more Dutch bands from the early to mid nineties sound somewhat similar, think of Spina Bifida or the first Celestial Season album without keys and violin.

Strong points of this album are the deep and dark production, the guttural growls of John and the twin lead parts. Add up some tasty guest spots on lead guitar by Eric Daniels (Soulburn, Asphyx a.o.) and Robbie Woning (Dead Head, Beyond Belief a.o.) and there you have it, a greased Panzer of an album. A few songs definitely stand out for me, ‘The Fallen Ones’, ‘The Unholy Roman Empire’ and ‘We, The Lords of Chaos’.

Since the recording of the album, Eric Daniels has joined as a permanent member. Since John McEntee lives on the other side of the Atlantic, Leon Helleman was recruited as vocalist, and Sandra Hoengen (ex-Goat of Mendes) completes the line up on bass. Live shows are to be expected as soon as this fucked up plague passes by. (Stijn)