Baptized by Fire – Upon The Pyre 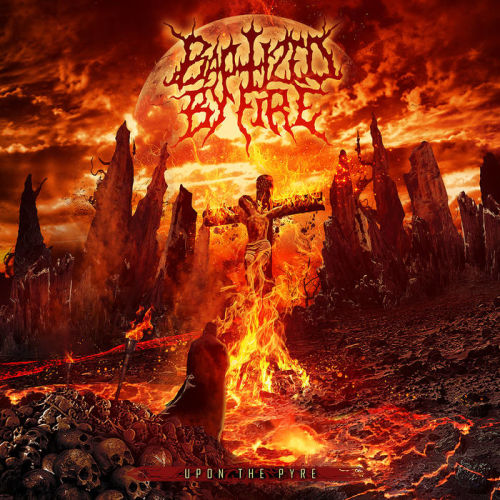 They say everything is bigger in Texas. Now I don’t know that for a fact but I will say that as far as the last couple of years are concerned the riffs out of Texas have been some of the most ferocious and YUGE sounding riffs of the last handful of years. You have bands like Imprecation, Frozen Soul, Absu, and Chapel of Disease. Now we have some evil sounding barbaric death from Baptized by Fire.

Hailing from the unholy streets of Houston these maniacs are no fucking filler and no fucking around hitting you straight in the face with, “Given unto Moloch” a slow build into a monsterous sound of weeping souls getting sucked into the hellfire. When I start this album I feel like Quinten Tarintino in the movie, “Little Nicky” and start saying things like, “YOU MAKE THE LORD… VERY NERVOUS” and “HELL FIRE IS BURNING ME ALIVE”

A very cool, “Pumpkinhead” sound clip starts off the 2nd song on the album and really sets the mood for the rest of the album. Evil seething through every note of “Upon the Pyre” hitting you in the mouth with every transition. The rest of the album is no different and really packs a punch. With songs like, “Ritualist Burning of the Dead” and “Masticated Savior” you know you’re in for a good time.

This is one of the heaviest albums to come out of the lonestar state and with members of Uncleansed, Braced for Nails, Imprecation, and Cerebral Rot you can kind of assume what you’re getting yourself into. A no holds barred slab of disgustingly evil Death Metal that doesn’t fuck around and hits you in the face as soon as it starts. Get into it.. (ThatAstronautGuy)