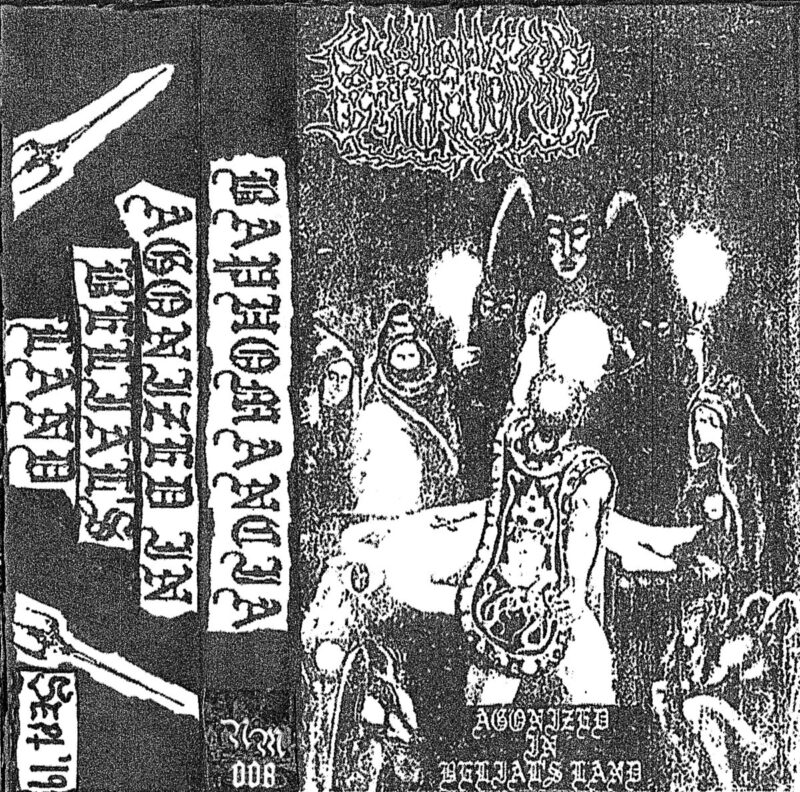 Baphomancia are a two piece Black Metal band from the US, formed by the excommunicated Insulters Of Jesus Christ: Tony Satanas (Voices, Guitars, Organs) and Sadismo (Drums, Bass). They describe their brand of Black Metal as ‘Abyssian Necro-metal in the vein of Crematory (Bra), Beherit, Nebiros, and Bestial Summoning.’ Illustrious names and references by all means. But can this ‘Agonized in Belial’s Land’ 7-track demo live up to all those mentioned expectations?

First track on the demo is a dramatic orchestral keyboard intro with tumultuous noises and deep demonic laughter, immediately followed by a burst of primitive and filthy Black Metal, full of heavy pounding on empty coffins (the drums), a down-tuned menacing guitar with simple, yet effective riffs in conjunction with the bass and bestial vocals, filled with demonic growls. Baphomancia don’t seek to write a well composed song: everything has to be said and done well within 3 minutes. and if we don’t hit a note, we might as well crack one. I can clearly hear the inspirations of a Beherit or a Bestial Summoning in their musical terror. The music evokes visions of dark catacombs, candle light lit rituals, cloaked figures, ritualistic daggers and other devilish practices.

Mission succeeded. It breathes out that authentic feeling from those old, legendary demo tapes that have become cult items by now. On itself – the songs aren’t that fast-paced. Baphomancia make sure everything remains drenched in a pit-black atmosphere of Satanism, Devil-worshipping, Black Masses and hatred against God. We wouldn’t want to have it any way else, now would we?

Fourth track, “The Denunciation (Intercurse)” is a dungeon synth driven intermezzo, again followed by a chunk of cavernous hell-noise with tormented vocals. One might add early Samael to the list of influences as well. Seventh track, “Belialian Sabbat (Outrocide)” is a supplication to the Horned Deity in dark whispered incantations, complete with a creepy organ. And the demo closes this way to complete the circle drawn around the bloodied inverted pentagram.

‘Agonized in Belial’s Land’ is a very worthy first effort, containing all those influences that are required for this type of primitive underground Black Metal. The overall sound is decent enough to demonstrate the dark, demonic nature of the music and the band.

A real shame that the demo clocks out at barely 15 minutes. But the band has announced that a new recording will be anointed with the Devil’s blood this year.

For those who like their Black Metal old school-ish and 100 % satanic – a mandatory underground release. 666 (LCF)