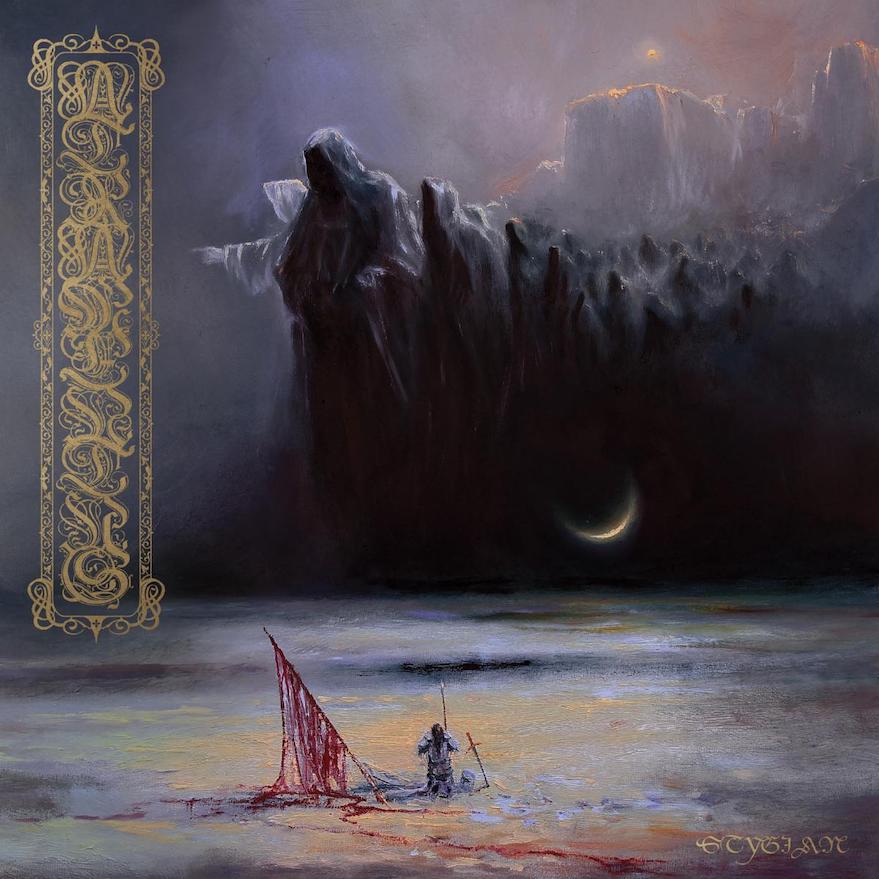 Heading into less appreciated subgenre, Funeral Doom is not for a beginner’s ear. Atramentus is a quintet based out of Canada. Developed back in 2012, founded by Philippe Tougas (vocals / guitars) has been part of and is STILL currently active in numerous projects, and reminded me he also did a guest solo appearance on a previous review I covered for Serocs.

I’m impressed at how Tougas managed to shelf this for so long; patient enough until selecting members individually suited for this vision of “Sygian”, beautifully bringing its subjects within three dirges descending to their interment. Recorded in 2018, this premiere LP was well worth the wait.Cover art done by Polish artist Mariusz Lewandowski, who’s works remind me very much so of the late great Polish legend Zdzislaw Beksinski; both creating these stunning nightmarish images.

In this case, you see a man impaled with a sword on his right and a dissipating flag on his left, hovering above, a descending slope of cloaked figures as if that man surrendered to his fate. 44 minutes broken into III parts, a concept album about Gods above creating natural catastrophes upon Earth, burning, drowning, putrefying remains all around, sparing no one. “From Tumultuous Heavens” (16:28) introduces the mood; overwhelmingly somber, sedated tempo, leaving one feeling heavily burdened by sadness and grief. “In Ageless Slumber” (4:54), love the ominous keyboard intro by Francois Bilodeau, this naturally hellish sound with brief vocal appearance at the end of track.”Perennial Voyage” (23:17) appreciate it more when Tougas shares what inspired him to write this particular song.

His vocal cadence is eerie, dreadful, growly and overflowing with haunting spirit, almost powerful enough to summon the dead, if not vocals alone, his guitar work because god damn those riffs are pure poetry. Melodic, climactic, accepting death and embracing what afterlife had to offer. (Tori Belle)