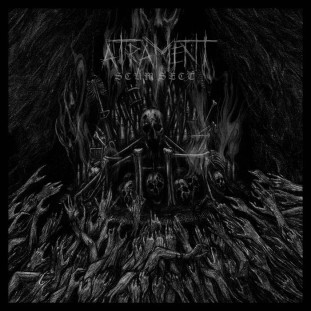 God damn the crust is strong in this one, and by this on I mean, “Scum Sect” by the crust punks in Atrament! God damn is it a good one too! Blending crust with black metal is never a bad thing and these guys are one of the best in the game giving us an album that is a hate filled, riff driven dark descent into madness that is Scum Sect.

Right out of the gate,”Plague Upheaval” smashes you into the dark oblivion for 30 seconds and then sending you on a spit filled journey to hell. Clocking in as one of the longer songs on the album there is no slowing down in this one. Mattia Alagna (also of Abstracter) has just the filthiest growl through the whole thing and he seems like he’s not even human and actually the vocals on the whole thing give it the black metal vibe just the haunting sound of them makes it feel more whole in my opinion.

With this being a more D/beat sounding album there is that one factor where, well we get D/beats for a while (entire time) but there are some great progressions throughout and one example of that is, “War seed”, and, “This Night shall See No End” while both of these songs still hold the dbeat element close i feel are the 2 strongest most memorable songs on the album.

Very strong sophomore output by these guys and I would highly recommend especially for people on the hardcore side of dm and the like. (JonG)