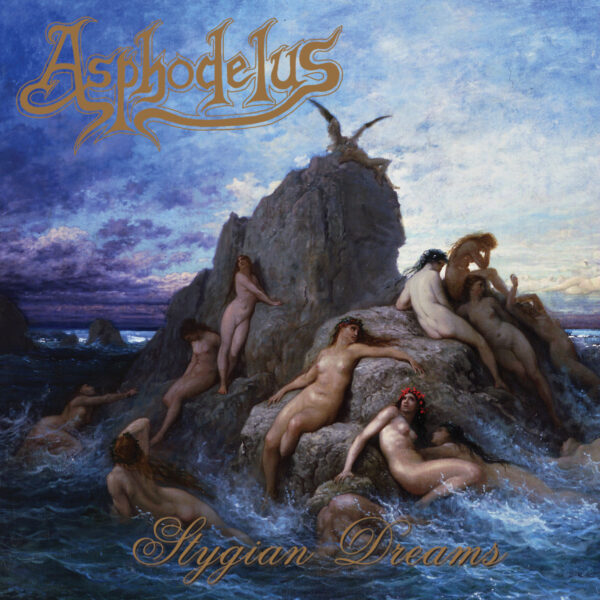 Asphodelus began in 2013 (on the esteemed Iron Bonehead Productions) as Cemetery Fog, playing a raw but visceral mixture of Black, Death, and Doom Metal which, over the course of a few demos and an EP, began evolving to more of a sturdy melodic Death/Doom style akin to that which first emerged from Scandinavia in the early ’90s, most notably embodied by the UK’s “Peaceville 3” (Anathema, Paradise Lost, and My Dying Bride) and the Swedish legends Katatonia & October Tide, eventually fully manifesting when the three-piece band reformed as Asphodelus in 2016.

Through this incarnation, they released the stellar 2016 EP “The Veil Between The Worlds” and then the very impressive demo “Dying Beauty & The Silent Sky” which fully fleshed out the classick formula, adding to the unfiltered aggression and wistful, subdued melodies via some tastefully placed violins, clean singing and female vocals; not overusing these elements or indulging in polished-up studio fuckery, as many of the early melo-death/doom pioneers like Theatre of Tragedy or Sirenia did. But earlier this year, Terror From Hell Records unleashed a debut full-length from the Finnish trio, titled “Stygian Dreams”.

Three songs from the previous demo made their way onto this album, along with five new compositions, and while the style is still ostensibly rooted in the same early-Amorphis/Katatonia/Anathema domain, the songs are now awash in a huge, bright & clean production, with lavish synth keyboards that become overbearing and drown out the inherent power of the death metal roots.

There are still some epic riffs, the vocals remain gruff and forceful, with an occasionally manic edge to them, often reminiscent of the legendary Martin Van Drunen (Asphyx, early Pestilence), but even these assets now seem to be more laconic and dulled than on the previous releases. The ubiquitous sparkly, twinkling keys are my main gripe, but there is just an unforgivably *modern* polish over all of this, including the songwriting itself, that utterly clashes with the underlying musical premise.

Right from the beginning, there is a pointless intro, nearly three minutes long; just mindless droning, meandering synth wankery that goes nowhere, adds nothing but annoyance, and serves only to warn of the bad direction this band has taken. The first track proper, “Lamentation of the Lost Soul” is one of the holdovers from the demo, and is now drenched in these sappy, saccharine keyboards which are too prominent and high in the mix, like later-era Dimmu or CoF; totally obnoxious, and it heavily detracts from the music rather than adding atmosphere like in Nocturnus or Emperor’s early works, for example. There are a few moments where they do actually come up with an interesting piece to justify this symphonic intrusion, such as on the next track “Scent of Venus”, also originally from the demo, but it is so heavily smeared on and saturated through, like a whole jar of jam on a slice of toast. For the most part the material fared better without it, in my opinion. Another thing to mention is this is something of a concept album, in that the lyrics are taken directly from the poetry and prose of writers such as Frederich Nietzsche, John Milton, Dante Alighieri, J.W. Von Goethe, and others, and although they’re somewhat hacked up in the delivery it’s still an interesting approach, if not an entirely original or inventive one.

“The Hourglass Infernal” is a newcomer on here and starts out with heavy promise, but quickly falls prey to the bombastic keyboard presence, and then the guitars go into happy upbeat melodic mode. Why!? It really bummed me out when early masters like At The Gates, Dark Tranquility, and In Flames abandoned their crushing heavy origins to go mainstream with soft pop hooks and “deathcore” chugs, and now it’s like watching that happen all over again. “Delusions Ad Astra” does the same fake-out, with a crunching, hard-driven first minute crumbling into sugary, upbeat melodicism which then tries to veer back into the heaviness, but for me it’s just off-putting, like man you lost me with that, I ain’t feelin’ it no more. I’ll admit to liking some of the “Beauty & The Beast” style stuff from the late ’90s/early aughts period of death doom, like Tristania and Sins of Thy Beloved…. Although their stuff was cheesy, and at times totally over the top with goth theatrics, it retained a cohesive panache that just isn’t there for this. Asphodelus worked better without all this studio fuckery and mainstream pandering!

In “Stygian Dreaming”, the vocalist goes back to his earliest black metal style of harsh rasping for a moment, which is a terrific touch to the song, but it’s unforgivably tainted by the disgustingly poppy sections surrounding it which they were obliged to splice in, as if you’re listening to Nightwish or Evanescence all of a sudden! It’s a very jarring and unpleasant sensation, unless you’re fucked in the head or something. In which case, just Fuck You! “Sleep Of Eternity” is the third of the demo tracks culled for re-tuning here, and suffers just as badly as the rest. Imagine sitting in a pleasant hot bath that suddenly goes tepid and sticky, and then slowly begins to warm back up. It doesn’t feel good, it’s a disturbing travesty of what it should be, but you’re submerged in it, so your body tries to tolerate it. That’s basically what my ears experienced throughout this album.

The final track, “Where Freezing Spirits Fall”, is actually the best of the lot, where the big fancy production and keyboards are actually put to inventive and successful use, providing authentic atmosphere and some intriguing accents to the undiminished, sombre heft of the old school Death/Doom sound and letting the melodies breathe, rather than compromising it with frilly antics. If the rest of the songs on this album had been handled this way, it would have been nearly perfect! Maddeningly frustrating, but it does offer some closing glimmer of hope that Asphodelus might pull it together and redeem themselves on their subsequent output. A Stygian can dream, right?

Poet’s Lament:
Turn that bouncy bullshit off!! I was having an amazing dream about a ’90s Death/Doom metal renaissance, goddamnit…. (Terrorgasm)