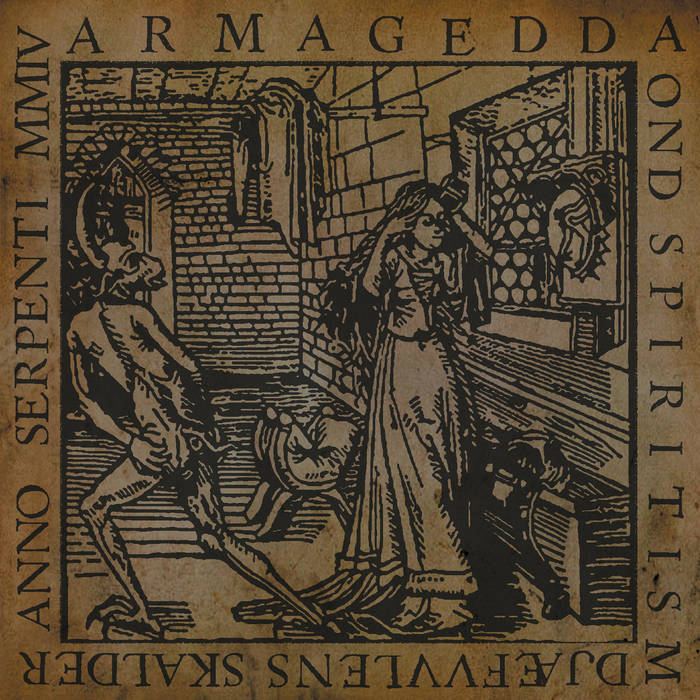 It was 18 years ago when I reviewed Armagedda’s ‘Ond Spiritism…’ for Vampire-Magazine (this zine’s predecessor) and while that is half a life ago, it still feels like it has been only recently that I heard this album for the very first time. I had been a huge fan of the bands’ earlier works and got hooked by the ‘Volkermord’ demo-tape, still under the Volkermord-moniker in 2000 and the absolutely astonishing ‘Strength Through Torture’ 7” EP (Painiac Records, 2002). The debut-album ‘The Final War Approaching’ (Sombre Records, 2001/Breath Of Night Records, 2002) fully lived up to the expectations and although its follow-up, ‘Only True Believers’ (Agonia Records, 2003) wasn’t as good as the debut-album, it still ended up at the highest regions of 2003’s best albums. Though I was still quite young when I wrote the praising words in 2004 on this album (and all of the preceding work) and much time has passed since, I still hold all three albums dear and they belong to some of my all-time favourite Black Metal albums.

Just before the initial release or ‘Ond Spiritism…’ the band announced their farewell, they wanted nothing to do with the Black Metal scene anymore. It even went as far as to state that they were no longer a Black Metal band and never will be again. Well, seemingly blood is thicker than water, admittedly it took a while, but eventually both A. and Graav started making Black Metal again in various new/other projects and, not long after the release of this Nordvis Productions-reissue (2019), Armagedda announced their return with the release of some digital singles and finally with the 2020 release ‘Svindeldjup Ättestup’ (Nordvis Productions).

Back to ‘Ond Spiritism…’, though a full in-depth review would not be really necessary as it was already reviewed upon its original release, but it might be good to look at what time has done to the album. The mid-tempo black metal with the raspy vocals still fit nicely with the Darkthronian riffs. Both the guitars and drums follow their own creative paths and together with the rumbling bass blend into an atmospheric and hypnotic sound that is so unmistakably Armagedda – a sound that only Stilla (with A. in their ranks) ever came close to. Never do they indulge in messy blast beats or chaotic dissonance. Instead, they opt for patiently building atmospheres through strumming guitars and deliberately slowing down the tempo. It still sounds so passionate, well-balanced, almost delicate. Even today, the album lost nothing of its brilliance – on the contrary, it is a bit like good wine, it gets better with age. Despite I am considering “The Final War Approaching” to be my favorite Armagedda album, I fully understand that the general consensus is that “Ond Spiritism…” is the bands’ magnum opus.

In one of the early reviews I called Armagedda the “future of Black Metal”, which is a statement that doesn’t necessarily prove true, but that’s mostly because of the fact that they threw in the towel on it pretty quickly. The music, on the other hand, is still very much rock-solid. And, if you happen to have been living under a rock or maybe just recently got hooked by Black Metal and haven’t heard this album yet, you should do so right away. There’s no excuses left anymore…   (FelixS)