Apep – The Invocation of the Deathless One 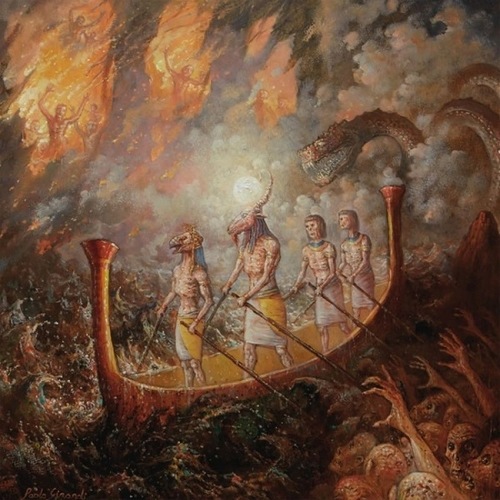 Four years after their formation in 2016, German death metal upstarts Apep have emerged with their debut LP, “Invocation of the Deathless One”. On this recording, the band show a nice level of technical proficiency and overall fairly logical songwriting in a tonality largely reminiscent of Nile – in this vein, Apep employ a similar theme of Egyptian mythology, represented prominently in the beautiful cover artwork rendered by the expert Paolo Girardi, as well as the song titles and lyrics (or even the band’s own name, taken after the Egyptian serpent god of chaos and opponent of order). The album was recorded by the band themselves with the exception of one collaborator for drum tracking, and the drum sound itself displays somewhat of a “do-it-yourself” quality (perhaps it was done in a rehearsal space) which nonetheless represents humanity and not immensely sterilized and compressed robotic tracks.

Individual performances are strong, with no instrument really outshining the other to a noticeable extent. Guitar solos, when utilized, are technically proficient and well phrased and it also seems both guitarists sometimes trade solos (as in “Banishing of Chaos”). Bass is performed by a musician named as Exx Tom of Exxperior on a session basis, adding a throaty growl to the trio’s mix, rarely overshadowed by the often quite busy guitar and drum playing and even standing out prominently.

The music is set largely at a faster pace – frequently using different blast beats and a variety of swift tremolo, chordal and single picked riffing – but as well, after a few minutes generally slows down and displays a nice atmospheric quality (even using haunting female singing in “Spell for Passing the Sandbank of Apophis”) that releases the tension built by the racing strings and drums appropriately, allowing drummer Merlin Friedrich to play with more nuance than aggression in these sections. An example of the varied songwriting used is “The Black Pyramid of Nagash”, which begins with a slower doomy pace compared to the quick openers of the album after a brief interlude then mounts in intensity before eventually breaking down again.

The faster blasting sections often have a more fragmented feeling with shorter one or two measure blasts punctuated by brief fills or cymbal accenting, but nonetheless the blasting is often rather fast and it seems the band’s drummer worked quite hard on this recording.

Power chords in the guitar – though used for slower grinding riffs at times — often don’t form the basis of riffs in the faster sections, but rather truncate phrases or provide a snarling tail at the end of single picked scalar phrases and fast tremolo picking lines. Sometimes the guitarists separate and provide catchy harmonized melodies over skank beats that will immediately bring to mind classic Nile, who seem to be their most prominent influence (though they also identify Morbid Angel, Death, Pestilence, Vader). This is not to say the band is merely an imitation, but there are tonal resemblances – with perhaps different objectives in the music.

These songs overall have a memorability and tunefulness that allows the more aggressive faster sections to be impactful while not maintaining them for such a length of time it becomes sterile. The band is able to maintain a consistent atmosphere throughout the length of the recording which sometimes eludes younger bands. “Invocation of the Deathless One” is an overall very competent release with a good pacing that for a debut album is quite promising and shows potential for growth, depending on the intentions of the band. (Tormentor)