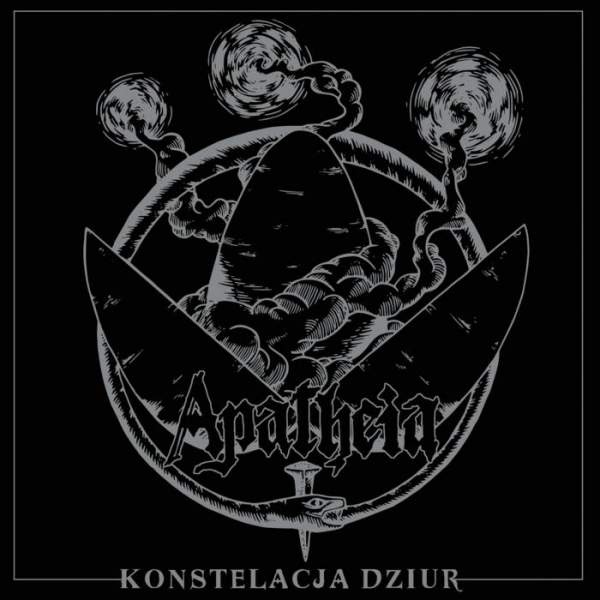 Apatheia, emerging from Mielec (Poland), is a trio black metal band while sitting on the death metal border as well. They bring us their debut full length “Konstelacja dziur”, but it doesn’t sound like a debut at all, but their more so tenth full-length album, as the band members show such craftsmanship with their instruments, which is complex and with grace, as well the production and crystal clear sound. While the guitars and drumming which both have a sound that is both clear and clean, that is fused altogether with the perfection of atmospheric repetitive riffing and rhythmic Black Metal drum patterns )which can be a perfect marriage of black ‘n’ roll, hard (thundering) hitting drumming and within the guitars that speak volume, even the guitar work/riffing somewhat reminds me of Demonaz riffing on “March of the Norse” full-length), with vocals that remind me of somewhat of Behemoth’s vocal style of their later work. Whilst most bands, the vocalist can be the driving force within the band, but with Apatheia, it the guitarist and drummer that are the driving force although the album.

With only eight tracks on the album, two stands out, which are “Boże ciało” (instrumentation track) buzz like atmospheric heavy riffing – fast and chaotic, bracing the fast-mid-tempo drumming, all these are played at the same time and with grace and ease! And when the vocals kick in, which you never know when this happens, these vocals are strong, brutal and epic, while the second outstanding track “Supernowa” (also an instrumentation track) which has a like down-tune doom intro, mid-tempo drumming and the guitar riffs and the vocals that are similar to “Boże ciało” but, to me, it is the last three minutes of the song, that catches my attention, with it’s peaceful, charming atmospheric riffs and drumming, that as this hypnotic and repetitive drone like feel. (KristianM)