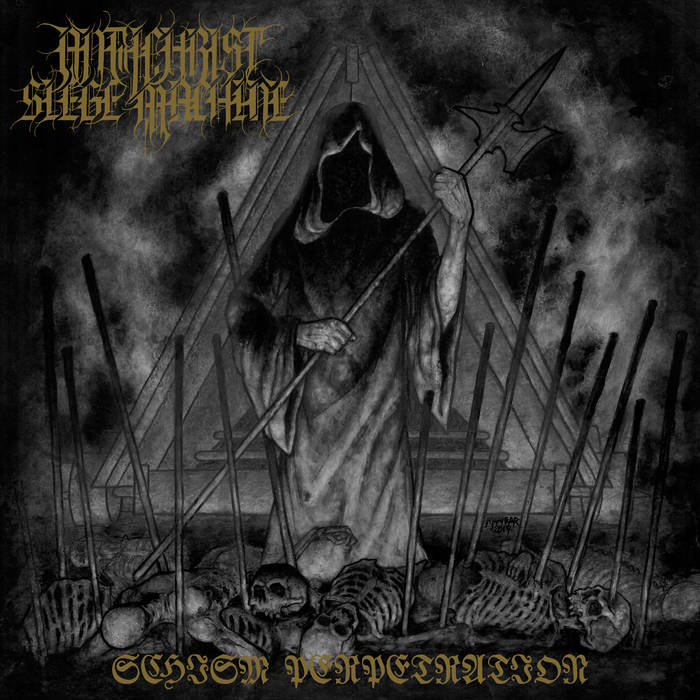 How I like shots like that. Quick, fast, relentless and straight in your face. 29 minutes of total War Metal mayhem for fans of Blasphemy and Ross Bay Cult. That should be enough for anyone interested, but let’s give credit to American Antichrist Siege Machine as they are not just a copy of Canadian cult. They managed to fit in War Metal genre perfectly and still make it enough different to not mistake them with many other bands.

So besides typical War Metal fury we also get a few slowdowns and melodic (!!!) parts. And I think that is the thing that set them apart from other acts. They can not only relentlessly batter our eardrums with thick wall of sound but they know when and how to slow down. It never lasts long but it fits there perfectly and naturally.

Beginning of “Enduring Power” is a perfect example of that and one of better start of a metal track in a long time. Slow guitars open it just to hit the listener with full force after those. Similar in “Hell Fire Reign” but here we get those slow parts in the middle of track which lasts 58 seconds! And that’s an achievement to make short track like that vary in its duration. And above that we get sick vocals that sounds like coming straight out of hell’s deepest dungeons. Guitars are playing relentlessly  throughout the album and even when they are slowing and getting “melodic” it is still like getting punched in the face by Mike Tyson singing happy birthday to you.

It may come as surprise  but the band is made by only two people! Did i mentioned that this is their debut album (which if you were lucky enough you could hear partly thanks to tape “Promo MMXVIII” which was sold on tour with Heresiarch)? I can’t praise this even more as you may think I got paid to do that (yeah right) but I’m surprised it didn’t appear in any 2019 sum ups. “Schism Perpetration” is high in mine and for me one of best albums of last year not only in its own genre. (Sulphur)