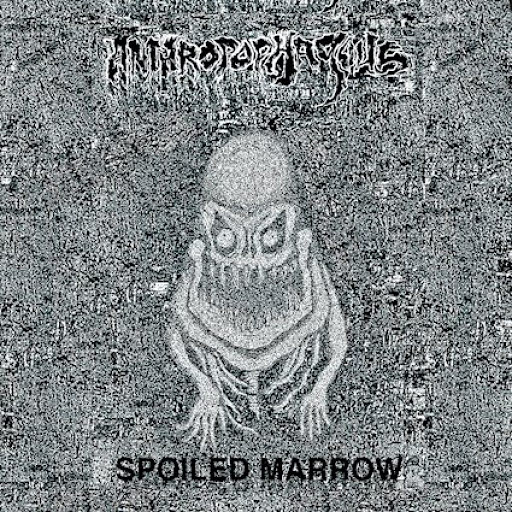 Each time Blood Harvest Records, announce and release something new, anticipation draws in. Looking back into their roster, always give a sense of wicked and horrid pleasure, when you see the names associated; Zealot Cult, Taphos, In Obscurity Revealed, Crematory Stench, Church of Disgust, Evoker, Gutvoid, Horrifying are to name a few out of many other swarming acts.

Anthropophagous, must have been one of such promising hordes Blood Harvest have come across in that time, as after their debut tape release via Headsplit Records back in October 2019, Blood Harvest Records brings back their debut demo, “Spoiled Marrow” with a 7″ vinyl and Digital release, on March, 2020. Such strong associations at early days, makes total sense, as Anthropophagous encapsulated nothing but death metal putridity here. Hailing from the frozen, decaying wastes of western Massachusetts, they must have been lying in wait, simmering in obscurity before the opportune moment to strike, as the four-song “Spoiled Marrow” announced their arrival with utter rudeness and crudeness. A new entity they may be, but Anthropophagous harken back to the ancient forebears – reflect the likes of earliest Incantation, Grotesque (Sweden), Sadistic Intent, Nuclear Death, Necrovore and early Finnish material in the likes of Sentenced, Convulse and Demilich – and brewed devastating Death Metal with no frills, no ploys, and no synthesizers: where only the rotten sensations rendered without mercy.

The opener “Trial by Fist and Stone” devolves rapidly into chaos and the here the creature Anthropophagous invoked lower energy like beast from depth. Very low, into-the-casket voice is how the swamp brute sounds, and beyond deadly guitar tone glimpse (or is it base!!) on the self-titled track invites the chaotic rumbling of upcoming “Illness Enthroned” and “Memento Mori”, which will continue piling on, for the total of 16 minute and will strike like a thick wave of nausea forcing your head into the murk, as you stumble and collapse in rhythm. The cutting bass tone throughout, allowed to break through on its own in the second track which adds so much low-end snarl to the short record. Such pure, raw and putrid sound that Anthropophagous emits, was recorded and mixed at Disappearing Mountain (Massachusetts, USA), and visually abetted by an utterly evoking artwork; embodied a noteworthy opening in making swampy and cavernous Death Metal.

Whether the band is out there to be serious or have fun with all this is unknown but the moniker which seems preferring ‘humans for food’ – communicates that, this demo shall entice all the genre faithful’s to give several spins and praise the beginning of Anthropophagous. (Rocky)