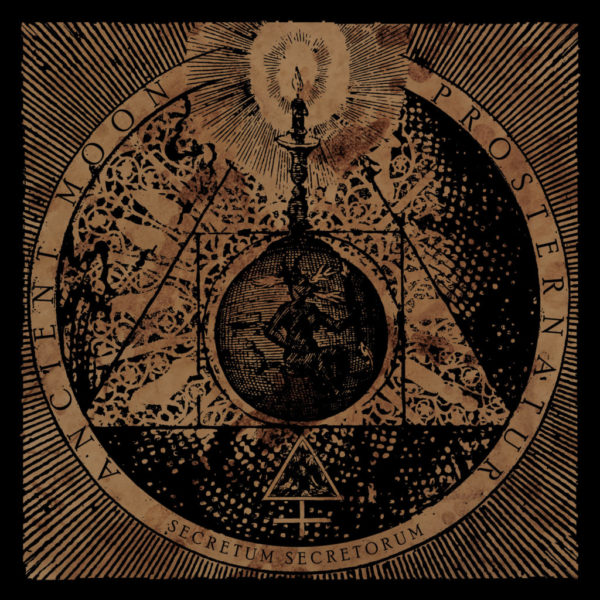 Ancient Moon had the opening track, which was their one epic, 10 min long song on this split; it was from their full length Vvltvre, which is an entire album seemingly-inspired by the self-titled album Mayhem track: “de mysteriis dom sathanas”; consistently evil and hypnotic, atmospheric-black metal with an ominous horn-like houl enshrouding the 28 minutes of what could be one long song, appropriately interrupted with clean Batushka-like interludes with male choir voices and church-organs. But, unlike most atmospheric black metal acts, you will not feel one with nature listening to this album…but, rather an isolation only the darkness of a concrete tomb can spawn. Droning blastbeats power on while Attila-like vocals preach until they decide to whip with their Maniac-like screeches. The concept of the album is intelligent and thoughtful. The raw production embodies dissonance – – – Prosternatur finished off the split with the last 3 songs, none of which were on their only locatable, prior release “Abysses Abyssum Invocat”…I must say, these songs really grow on you; atonal chord progressions picked in various styles: starting off will hypersonic black metal with hyper blasting battery and matching bass, before smoothly transitioning into atonal rock & doom…from there we’re taken into dark alleys with atmospheric noise and sound effects and onto 1349-like riffing with hints of Deathspell Omega…this album is evil…very evil…the production definitely captures the rawness without loosing the clarity; the guitar tone is crunchy and in the Metallica-wheelhouse; the bass sits nicely as a thick bottom end for the guitar while the drums are able to possess many different elements and styles, reminding me of the diversity of Epel Duath…the bands on this split could easily play to the same crowds as their sounds fit one another nicely… (Orpheus)