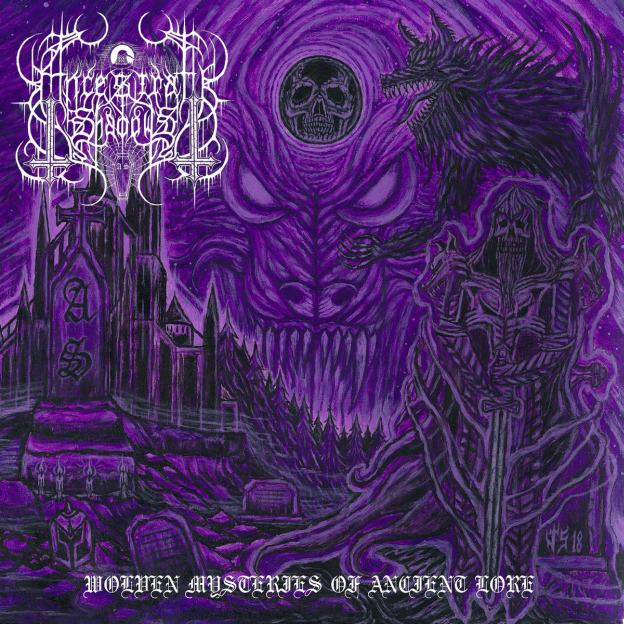 “Forest of Heathen Rebirth”[2011], “Preserving All Darkness in This World”[2012], “The Sorrows of Centuries Past”[2016] – That’s how Ancestral Shadows expressed themselves, since their initiation in Autumn, 2010 by Apparitional Wolf Shadow. And undoubtedly, with these releases, New England Black Metallers embodied the bone chilling atmosphere and majestic beauty of New England’s Dark Past and rightfully became torchbearers of grim, medieval and sonic mysticism in forms of Black Metal. After the release of “The Sorrows of Centuries Past” on 2016, these American’s returned to their dungeons and came back with their third full length album ‘”Wolven Mysteries Of Ancient Lore”, which was released in co-operation with Humanity’s Plague Productions.

The US Black Metal scene has always been source of positive surprises and by exposing to this release, you will be utterly impressed by its freshness and originality which displays a great variety of forlorn riffs, tempo and pace changes with movements in mid tempo range which gradually swell with crafty percussion, vocal scores with background sounds sets up a freezing and mournful atmosphere; altogether captivating you from the first second. With their trademark incorporation of enchanting medieval synth elements, this record transcends second wave Black Metal by building atmosphere through transitions.

Eight songs of this release are divided almost evenly into four long crushing Black Metal and four interlude type tracks with piano or acoustic guitar. From the initiation, depth of melancholy achieved here is out of this world; very sorrowful and bone-chilling intro that takes you directly to the New England woodlands. From here, the record progress like forged in the flames of old, this will be apparent from the very beginning of ‘Stronghold of the Black Abyss’; with its broken vocals, captivating and melodic riffs and great interludes. With, ‘Black Autumn Silence’, smoothly the drums transition from a blast beat to a d-beat, really giving a groove to get behind and during second half the song became well crafted with the bass riff introducing the finale. Then, ‘Forged in the Flames of Old’ appear as a pure instrumental piece which establish, as all that matter is imagination forged by skill. At the very end, title track emerge with a possessive spell cast forth where swarm of soul piercing tremolo waves narrate the wolven mysteries from the ancient lore, here one part of the lyrics says – ‘Our thirst for blood! It calls to thee! We a await Fullest of Moons!’- encapsulate the essence of this record.

Here and everywhere, the vocals sound like they are being possessed by ancient spells and because of being little hidden in the mix, gave a more haunting sound to them. Apparitional Wolf Shadow, has a vast range of throat armors, from desperate cries, to sharp howls and also clean singing, arranged finely throughout the record. Expressing about the synths, there is an ethereal feel to the synths themselves that really provoked the desired sound and sweeping waves of melody will keep you fascinated for the records duration and hypnotized by the seemingly infinite layers of fantastic musicianship. And, the album cover looks astounding from a distance but it’s absolutely terrible when you look deeply, masterfully envisioned by A.W.S. “Wolven Mysteries of Ancient Lore”, is an album that knows how to induce not only by playful but also atmospherically, which shall persuade Black Metal enthusiasts to experience it over and over again. (Rocky)