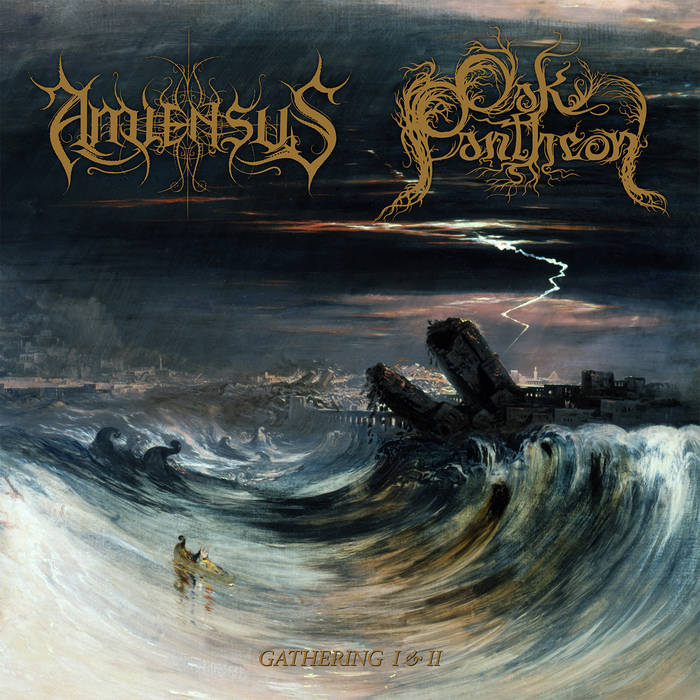 Not that long ago in 2013, Minnesotian bands Amiensus and Oak Pantheon joined their forces in creating an experimental black metal two-song split: “Gathering”. In 2018, it was succeeded by its somewhat better three-song follow-up, “Gathering II” – which lead to the making of this re-release containing both splits in their unity.

This prog- and folk-influenced piece is heavy on emotional expression, making it a great mood setter. Each song gradually unveils more experiences and feelings that tell the album’s story. As far as influences go, there sure is a lot going on here. Like Amiensus themselves state: their goal is to “explore their talents while sticking to black metal roots”. In my opinion, the most prominent sound of this split is that similar to Agalloch’s, and Oak Pantheon (“A Gathering”, specifically) reminds me quite a bit of Tribulation. But there are definitely other non-related elements. At times, it might seem like too much going on for some, putting into question if parts of a song function as a whole. However, to me the transitions between those parts sound intentional and knowingly made.

Two of the songs were made by Amiensus, two by Oak Pantheon and one is a collaboration between the two bands. The album starts off pleasantly dull and is since the very start built on constant gradation. Gradative techniques are also present within songs themselves, such as when a clean vocal slowly turns into a growl, or when a riff gets heavier and heavier, without you as the listener knowing at which exact moment it turned that way – like a vawe. As mentioned, the variety of content and style of this album gave it the ability for several different approaches.

The last track, “Now Enters Dusk”, which I believe to be the best one especially for the context, gives well-put closure to the album. It also brings the album full-circle: the very last word of it is the name of the first song. This is, in my opinion, to be left to listener’s interpretation so I won’t interfere by stating my impression.

Just as the sound of “Gathering” itself, the experience of listening to it is a journey of exploration. It’s telling you a story trough music and constantly bringing new information to light so I recommend listening to it in one piece. (Lana)