Amherawdr – Adorned with the Figures of Snakes 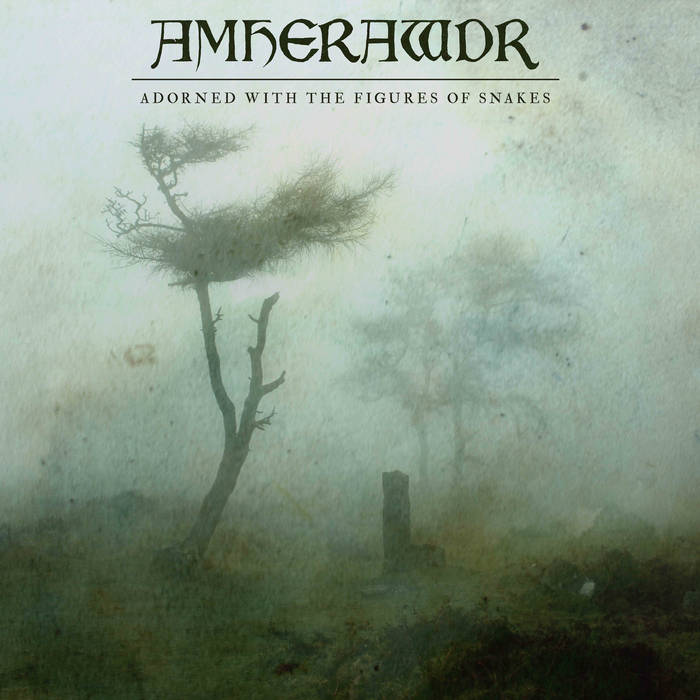 In 2005 Amherawdr was formed in Devon, England. Since than “Adorned with the figures of snakes” is their first release. There should actually be just one song on this record, but Onism Production decided to split it in two tracks. The hearing experience does not suffer from it. You will hear one approximately 40 minutes long atmospheric Black Metal track about bleak romance and mysticism of ancient Britain.

The song begins with an acoustic intro which creates a very ambient surrounding. To be honest this is an intro you expect in the subgenre of atmospheric Black Metal. The introduction of the whole set takes its time as the pace is slow but the song structure is very well build. In the first 10 minutes there is always some tension, when the song will get heavier, but the listener has to suffer. Every time you think that it will be heavier, the song even slows down more. But after the 10 minutes mark, the vocals kick in a more brutal way than before and aggression of the song rises. The only problem is, just for approximately half a minute. After that the pace gets slow again and the song stays in the same tempo as in the first 10 minutes. In principle that wouldn’t be bad, if Amherawdr wouldn’t try to keep the aggression up. That does not work as well in that pace.

In general this isn’t a bad record. I think it would be much more interesting to split this one huge song in 6 to 8 songs. The ideas are definitely there but it works not as well in one track, even if it’s split in half. Nevertheless when you are into atmospheric Black Metal you will surely have fun with this record and I can totally recommend to check it out. (HaCeBo)