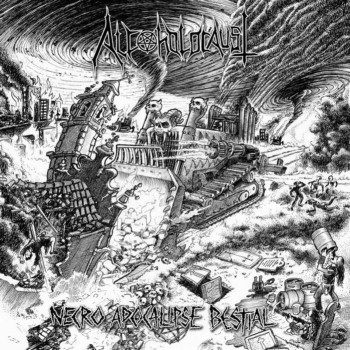 The Portuguese Hellprods label has a fine tradition as well as a knack for releasing evil ‘old school’ Thrash metal releases. Hailing the glorious 1980-ies, when bullet belts, spikes and jeans jackets full of patches still reigned. A legendary period.

Just by looking at the cover, you can pretty much sense what Alcoholocaust have in store for you, the listener. Alcoholocaust play and perform dark and menacing  beer puking Thrash/Black with all the elements that make this genre so irresistible.  The raw panoramic guitar sound, the nervous riffing, serious pounding drums and an infernal growling voice. It reeks of alcohol infused craziness. Guitar solo’s seem to emerge from out of the dark. Raw satanic barks and the occasional frantic high screams. Awesome !!

The fact that all songs are in Portuguese immediately draws the attention to the notorious Brazilian scene of old. It’s all there, a filthy archaic sound although with a superb crisp production. This album is full of juicy old school heavy headbangers such as “Speed Metal Tornado”, “Bulldozer Infernal”, “Anti-Gotico”, “Necro Ritual” & “Assalto Metalico”. I’d say a mixture of the Brazilian scene and the German black/thrash scene of old (Necronomicon & old Destruction). Playing time is not too long as it should be. Copy cats, a cheap imitation? Get lost! After all…it all goes in circles, anyway!

Conclusion : an impressive and perfect produced  album for those who crave for the days of old and for those who want to experience some real 1980-ies dirty bastard Thrash/Black. I’m too old for headbanging (that rusty old neck of mine + I might get a stroke ) – but I dare you to get a copy and thrash it up like there’s no tomorrow. The beers are on me! Play at maximum volume only!!! (LV)