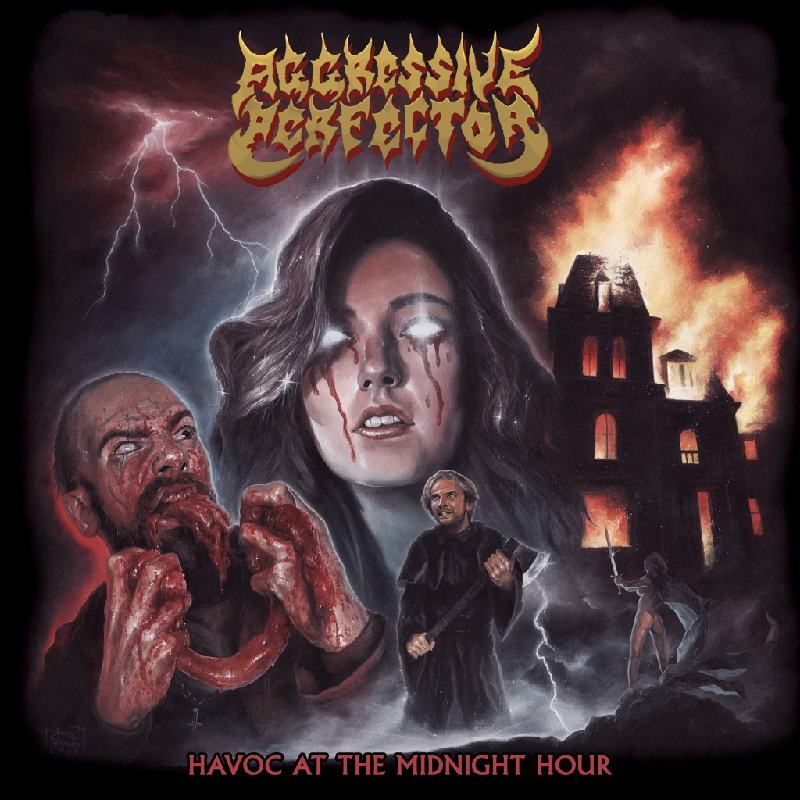 English Speed Metallers Aggressive Perfector is here with their debut album, which is set for release in cooperation with Dying Victims Productions on November 22nd.  With their demo ‘Satan’s Heavy Metal’ released back in 2016, the trio from the English city of Manchester, established their entity by summoning the glorious past and bringing together the best from Heavy, Speed and Thrash Metal. Their name is a clear indication that the band is highly influenced by Slayer; also their mix of speed, thrash and heavy metal refers to Venom, Midnight, Bewitcher, Tank and Mercyful Fate, wrapped by menacing atmosphere of blood thirsty horror and fanatic nightmares.

Led by General Holocausto, Aggressive Perfector reanimate early 80s NWOBHM by shooting it full of guitar-driven, evil thrash with pure acid vocals. And, with the overall thrashy and somewhat punk laden tonality, also bits of a crossover vibe will instantaneously take you back to the glory days.

37 minute of hellish nightmare initiates with horror movie style cinematic organs and crow calls, which immediately establish a stunningly classic feel to the introduction. Anthemic guitars chime in, building momentum before soaring riffs and pounding drums of Intimidator, marvelously set the course which persists from ‘Onward to the Cemetery’ till the very end of ‘Seven Gates’.

With all-round onslaught of ripping guitars, hammering drums and maniacal vocals, this record is surely a huge step up for the band from their early days, as they have become incredibly bonded musicians with a clearer focus that can be experienced through fierce performances on ; ‘Chains of Black Wrath’, ‘Land of No Return’, ‘Vengeful One’, and ‘Seven Gates’. Also, with hauntingly dark, old school and totally massive sounding tracks like ‘Into the Nightmare, ‘Turbo Evil’ and ‘Devild Bastard’;  Aggressive Perfector encapsulate a classic medley of killer songs that will surely fuel blood for reprisals. With plenty of variety in sound from the band, this record doesn’t become dull or dropped at any point by balancing a really punchy and surprisingly  atmospheric delivery in many parts ; especially ‘Into The Nightmare’, which showed an impressive songwriting strength the band posses at such a early stage.

No doubt, ‘Havoc at the Midnight Hour’s eight tracks rip, shock, and always get you bangin’ along. A fantastic debut full length to play fast, play loud and if you want the kind of Metal you can sing along to while experiencing turbo-charged trip back to the glory days of frenzied insanity, than this is one of those albums certainly not to ignore and worthy for countless spins. (Rocky)