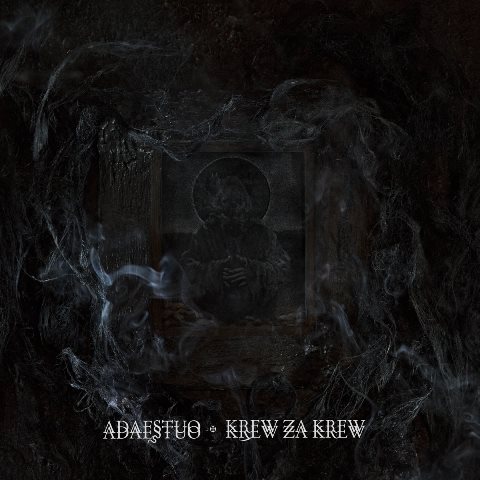 A very promising Black Metal group called Adaestuo final released their debut album “Krew Za Krew”. The international working group with (ex)members of Horna, Sargeist, Demoncy, Nightbringer, Incursus and many more set the expectations high with their debut EP from 2016 “Tacent Semitae”, which presented a 90s based Black Metal with some forward-thinking moments, thanks to the hypnotic and captivating vocals by Hekte Zaren and the meditative riffwork.

And yes, the album just became a strong debut of dark powers from beyond the curtain of existence. Straight Black Metal tracks alternating with dark ambient pieces including drones, piano plays and once again the disturbing and possessed vocals of Hekte Zaren.  A lot of ambience is created by the 3 musicians, sometimes just going for the minimalistic and the repetitive, being able to build up a heavy suffocating experience of almost shamanic ritualistic proportions. Some lead work here and there might be familiar If you know some works by VJS, which showed his talent in song writing once again.

Don`t expect “pure” black metal but BLACK metal, a full bodywork of darkness impenetrable, where atmosphere and the WORD are in front and reign in the light of the dark moon. Excellent work which encrypts more details with every listen and which has to be enjoyed in its eternity. (DPF)