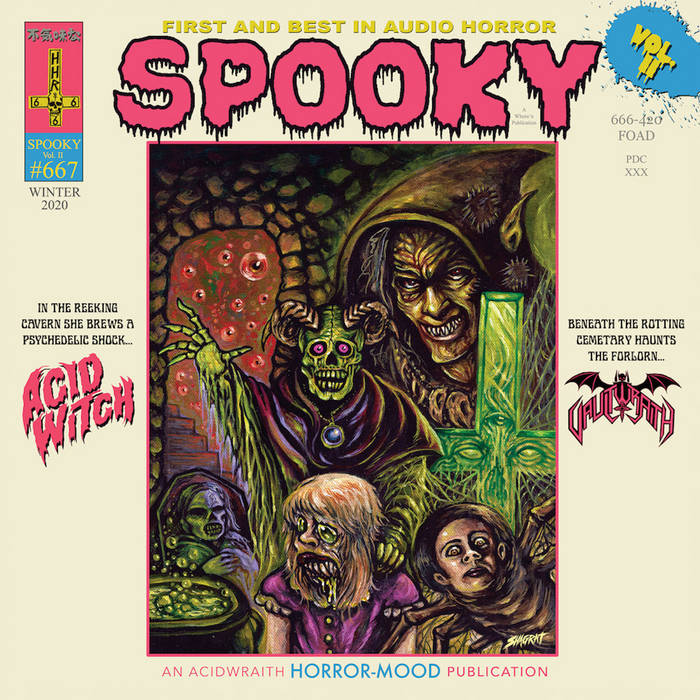 It’s not a convivial Halloween unless an Acid Witch release has surfaced. Fortunately, we have “Spooky Vol. II”, (seven years since the first) featuring crossover Thrash act Vaultwraith, to join forces for this four track split.

As always, cover art is on point to depict the best of both evils with notable details of a cauldron, hooded witch, even the floating eyeballs & interpretations in regards to the song titles presented in this EP.

Starting with shorter side Acid Witch, the opener “Jenifer” is based upon a July 1974 issue of the comic “Creepy” illustrated by the wonderful Bernie Wrightson & Dario Argento’s version of this story aired as an episode for 00’s series “Masters of Horror”. Compared to their closing track “Cinema Wasted”, more trepidation in the tempo, not realizing how conspicuous that abrasive raspy cadence is compared to earlier works, mesh of King Diamond & Killjoy styles with tamed riffs and (surprisingly) subtle keyboards.

“Cinema Wasted”, after the :35 sample, hastily accelerated goodness that’s fetching, but should have extended to even out with intro. Underrated Vaultwraith offers “Prophecy of The Black Spider ” and “Bewitch & Bedevil”. “Prophecy of The Black Spider” is a reference of a title featured on Andea Bianchi’s “Burial Ground”, no shits given approach nostalgic to 80s speed metal, kickass riffs & constant headbanging with ghastly vocals, sticking around for more. “Bewitch & Bedevil” has a reference to Vampirella but also a book that studies stages of people being possessed. Has a NWOBHM quality, mixing spewed guttural & gangly snarls.