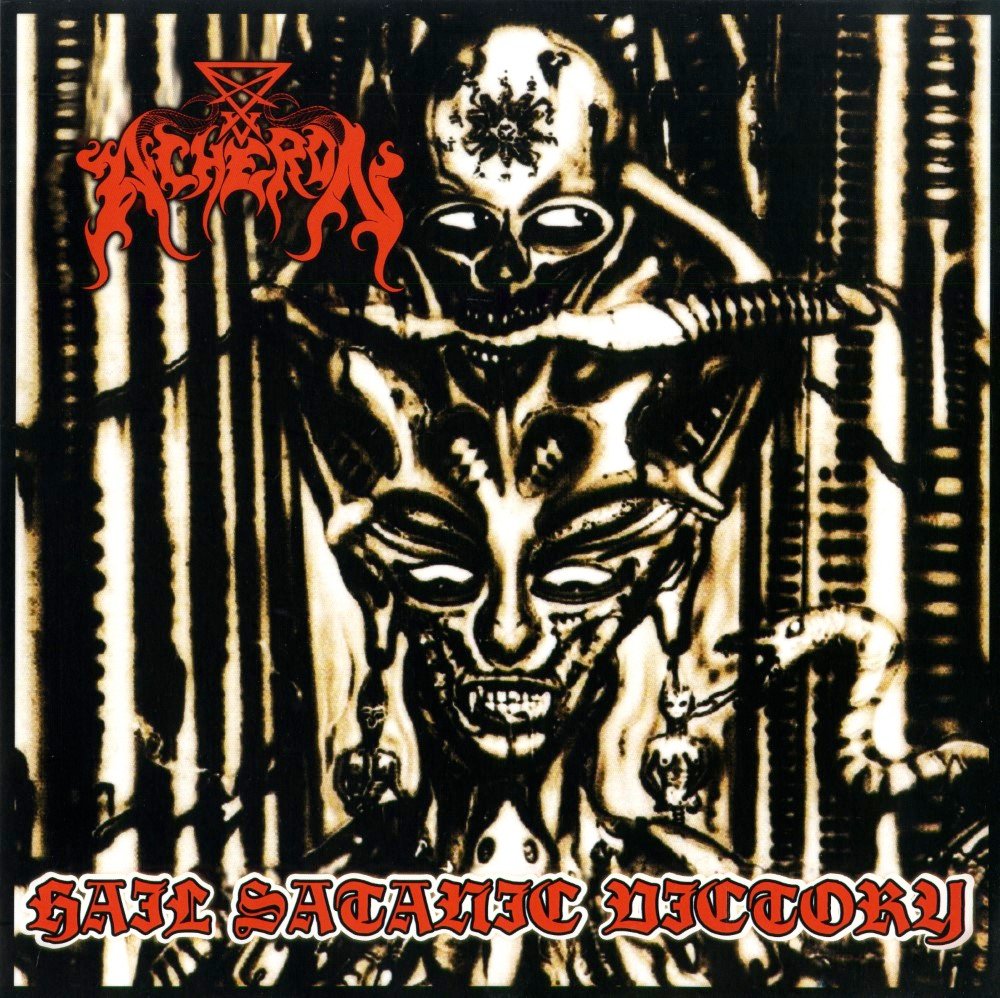 There aren’t many American Death Metal bands about which opinions are as divided as Acheron. There’s a lot of haters and a lot of fans. It seems there’s nothing in between. Much heard critic is that the music is too simplistic, infantile, lame or average at best. The bands’ debut album ‘Rites Of The Black Mass’ set the stage for Acheron as the ultimate satanic Death Metal band; down tempo Death Metal, low growls, catchy and, yes, simple riffs and the infamous intros to each individual song.

This concept has been continued to its follow-up, ‘Lex Talionis’ from 1994 and was also planned for ‘Hail Victory’ (the original title). But Lethal Records had problems with the title and forced the band to rename it. And not only did the original title disappear, so did all the intros. In this stripped-down version it was released in late 1994, but the band found a way (through a different label) to release this all in its intended form, so with intros and under the name of ‘Hail Victory’. Now both of these versions got reissued. Funeral Industries reissued the ‘Hail Victory’-version and VIC Records reissued ‘Satanic Victory’ on CD (thus omitting the intros). Yet, both versions do contain the two tracks of the pretty cult ‘Alla Xul’ 7” EP from 1992.

Although Acheron at this point (these recordings date back from 1992) had Mike Browning (Morbid Angel/Nocturnus) on drums and Vincent Crowley himself founded Acheron after he left Nocturnus, expect nothing here to sound like either Morbid Angel or Nocturnus. The aforementioned simplicity of the songs can’t be denied, yet this is the bands’ strength and core business. The down tuned, groovy songs are damn catchy and prove to be real earworms that echo on for hours. And just as the music isn’t exactly complicated, the lyrics aren’t of a pompous level either.

If you choose to pick up the vinyl version of this recording, you’ll get ‘treated’ with the original intros. These keyboard intermezzos were played David Gilmore, now High Priest of the Church of Satan. And just as with ‘Rites Of The Black Mass’ and ‘Lex Talionis’ the idea of using these interludes is good in itself, but it does not turn out well. It kind of breaks the vibe and coherence of the songs and exactly that is the strength of this release.

So whether it was title, the interludes, the keyboards by Church of Satan’s David Gilmore or the second guitars played by Vincent Breeding (white supremacist, working for the National Alliace of Willam Pierce), the controversy surrounding this release has overgrown the essence of what these songs are. As for me personally, and I definitely prefer the version without the interludes, these original six songs (clocking in at a mere 20 minutes) are the best of Acheron’s work. (FelixS)